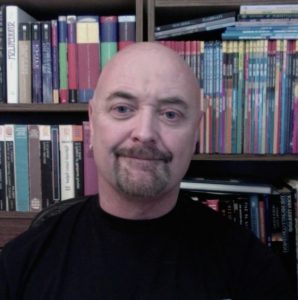 Author Bio:
I’m originally from the UK and am currently based in Calgary in Western Canada. I’m an author of science fiction and fantasy novels for children and young adults, including The Alchemist’s Portrait, The Sorcerer’s Letterbox, The Clone Conspiracy, The Emerald Curse, The Heretic’s Tomb, The Doomsday Mask, The Time Camera, The Sphere of Septimus, Flashback, Future Imperfect, Twisted Fate, and the Shadowzone series. I’m also the author of seven guides for writers and almost 100 non-fiction books.
I offer a wide variety of programs for schools and libraries, work as an instructor for adults with the University of Calgary and Mount Royal University, and offer a variety of online courses for both children and adults. I also offer a number of services for writers, including coaching, consulting, editing, and writing workshops, as well as copywriting services for the business community.

What inspires you to write?
Ideas can come from anywhere and everywhere. Out walking the dog, in the car, something in a conversation, a newspaper story, a billboard, an item on the evening news, books, historical events, other people’s stories, movies, or something out of the blue. I often find myself wondering 'what if?' Sometimes the challenge is to stop having ideas. Some may never be used, but I try to record as many as I can. I never know when they might fit in with a story I’m writing. Even ideas that don’t seem to work right away may provide a spark of inspiration in the future.

Tell us about your writing process.
I don’t really have any set process, but once I feel that I’ve got a good idea for a novel and enough material for the story I usually create an outline before I start writing. I like to make sure that the plot works well before I begin work. The outline might certainly change during the writing process but it helps to keep me on track and to write the novel more quickly.

For Fiction Writers: Do you listen (or talk to) to your characters?
Yes, on occasion. I think it's part of the writing process so that you better understand the characters and have a deeper understanding of how they'll react to the circumstances that are in the story.

Who are your favorite authors?
When I began my career as a writer I was influenced by the earlier books in the Harry Potter series. However, I didn’t want to write about wizards, dragons, or magic, but rather about the things that I was interested in, such as time travel, the paranormal, superheroes, ancient mysteries, or history. I was also influenced by Phillip Pullman’s The Golden Compass, The Subtle Knife, and The Amber Spyglass, along with some other excellent fantasy and science fiction works.

How did you decide how to publish your books?
The first eight novels were published by Tradewind Books, while Flashback, Future Imperfect, and Twisted Fate were published by Tyche Books, but my seven books featuring tips and advice for writers were self-published as paperbacks and as ebooks. I hadn’t self-published fiction before and thought it was time that I did. The Shadowzone books were finished and I believed that they were as good, if not better, than my other work. I also asked some people read them to confirm this and then decided to go ahead with publication. A lot of traditionally published authors also self publish as well now, so it’s quite common practice these days.

I'll probably self-publish again in the future. The third part of the Flashback series will be published by Tyche Books next spring, but I do have several other projects that I’ll most likely publish myself as well soon.

What do you think about the future of book publishing?
I think we'll see a kind of hybrid industry in the years to come. More and more people are self-publishing every year, but small presses also continue to be established and the larger publishers are also adopting to the changing market. Also the demise of the paperback and hardcover book has been predicted many times, so it will be interesting to see how things develop in the coming decades.

What genres do you write?
science fiction, fantasy, nonfiction,