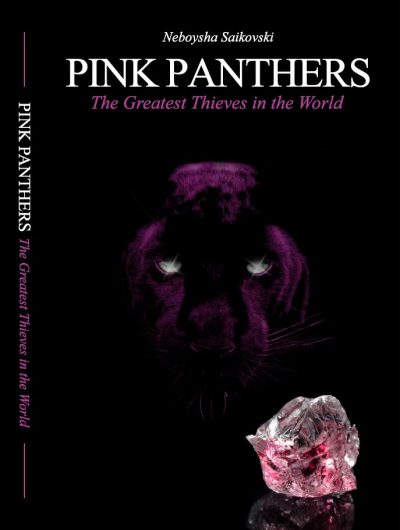 About Featured Book: Pink Panthers: The Greatest Thieves in the World by Neboysha Saikovski

Ocean's Eleven meets The Italian Job in this real-life story thriller about the infamous Pink Panthers gang of diamond thieves which has it all, shocking war and political drama, sweeping dialogue, dark humor, well-placed twists and flashbacks, and sufficient heist action scenes and crime thriller suspense to keep you constantly engaged.A powerful blend of real-life situations and crime thriller. One elevates the other, making this novel's theme all the more important in today's world… In the end, you will wonder who are the real greatest thieves – diamond thieves or corporate and political elites?

After the thieving team of the Pink Panthers successfully carried out diamond robberies in Antwerp, London, and Tokyo, they are recruiting an elegant logistics expert and a top make-up artist to prepare for the robbery at the Diamond Biennale in Paris. After successfully completing the job in Paris, they carry out two more spectacular robberies together, at the Amsterdam airport and in Saint Tropez, after which discord and attrition occur within the gang over the division of the loot. If there is no reconciliation, the rest of the gang is forced to forgather and train a new crew for another robbery, this time in Dubai.

A WORD TO THE READER
Diamond. A symbol of strength, durability, value, success, happiness, and love.
Imagine the world you know as one side of the street, where diamonds on display in expensive urban neighborhoods of the world's metropolises evoke a desire for wealth, fame, and, above all, a desire for power.Cross the street and meet the dark world behind all that glitter and glow. Find out how diamonds are made and come to that array of glittering shops and the blood, sweat, and tears that they represent in reality.
From the hot sands of Africa where greedy corporations exploit human and mineral resources in collaboration with corrupt politicians, through shining modern Europe all the way to Dubai, embark on an action-adventure with our heroes, the Pink Panthers, and personally experience the world’s most famous diamond robberies.
If you want to know what it's like to be a Pink Panther, read this book. As well as if you are interested in how the flows of money and the destiny of diamond robbers intertwine with the interests and activities of drug cartels and human trafficking, the white-collar crime of banking and corporate magnates, and diplomatic-political machinations.
One thing is guaranteed.
For those of you who read this book, the world will never look the same again.

AUTHOR’S NOTE
This novel is the first part of a trilogy that deals with the socio-historical context of emergence, rise, and (temporary) fall of the famous and powerful international robber group, Pink Panthers, created in the whirlwind of war during the disintegration of the former Yugoslavia. In close-up are the Pink Panthers characters, their principles, a system of work and organizational structure, tactical patterns of action and logistical processes, described through the example of adventures in preparing and carrying out robberies in Antwerp, London, Tokyo, Paris, Amsterdam, St. Tropez and Dubai. The background story shows the entire process of the diamond business, from relentless exploitation of rich deposits of poor third-world countries to the intertwining of the diamond business with other criminal cartels.