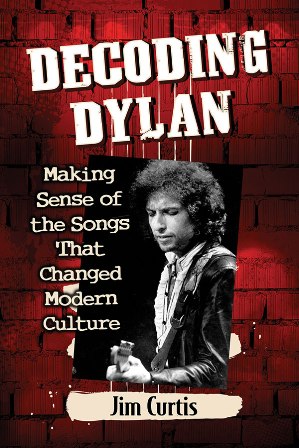 In Decoding Dylan, Jim Curtis takes readers behind Dylan‘s image as the quintessential rebel of the 1960s to reveal a new Dylan—Dylan the careful craftsman, a student of the art of songwriting. Curtis is the first Dylan scholar to draw on the revelations in his memoir Chronicles as well as a variety of sources about New York culture in the 1960s. He uses this material to arrive at a radically new interpretation of Dylan’s amazing songs, which revolutionized American music and which won him the Nobel Prize for Literature in 2016. Curtis shows that these songs are actually collages in which he ingeniously combined themes and images from American popular culture with themes and images from European high culture.
Readers of Decoding Dylan will come away with a new understanding, not just of Dylan, but also of his place in the history of American popular culture as a whole. .

What Inspired You to Write Your Book?
It started with Elvis. I grew up in Elvis' hometown of Tupelo, Mississippi, and saw Elvis perform live there in 1956. It was an unforgettable experience, and it gave me a lifelong connection to rock and roll. Elvis opened me up to Dylan, so to speak, and I have lived with his songs in my heart and mind for over fifty years now. Sol it used to upset me when I kept hearing simplisic autobiographical interpretations of his work, such as "Who was he thinking about when he wrote 'Girl from the North Country'?" I believed then, and I believe now, that Dylan deserves better.
Amd yes. Dylan is a genius, but he's not the only one in the history of Western civilization. A lot of smart people have studied high achievers in the arts, and in the first part of "Decoding Dylan" I show how their findings deepen out understanding of Dylan.
Unlike most of his fans, Dylan doesn't distinguish between high culture and popular culture, between T.S. Eliot and the late Little Richard. for example. So I bring high culture and popular culture together to show how he creates a synthesis of the two, and does so in order to express what is ultimately a mystical vision of the world.

How Did You Come up With Your Characters?
nonfiction

In 2016, the Nobel Prize Committee awarded the prize to Bob Dylan “for having created new poetic expressions within the great American song tradition.” The awareness that Dylan innovated within tradition, and specifically within the great American song tradition, was long in coming. In the sixties, Dylan’s songs seemed startlingly, shockingly new. No one had ever sung such dense lyrics to the strident chords of an electric guitar before.
Corresponding to the dialectic between innovation and tradition in Dylan’s work is the dialectic between high culture and popular culture in his work. Dylan is an artist caught between extremes. This may explain his preference for luminal, transitional, spaces in songs such as “The Chimes of Freedom” and “Sad-Eyed Lady of the Lowlands.” It may also explain why he stands in a doorway on the cover of his album Street Legal.
Apart from the obvious reasons why anyone who loves popular music would be attracted to Dylan’s work, this dialectic between high culture and popular culture has a modest equivalent in my own life. I grew up in Elvis Presley’s hometown of Tupelo, Mississippi, and I saw him perform live there in 1956. That experience gave me a lifelong fascination with rock and roll and popular music in general. But I also went north to school, and got a PhD in Russian literature from Columbia University. Odd as it may seem, I find Russian novels and rock and roll songs equally fascinating.
While I was working on this book, from time to time I did informal surveys with friends and family, asking them how many Dylan songs they could name. Most could name only two: “Blowin’ in the Wind” and “Lay Lady Lay.” These two songs form bookends, as it were, for the great songs of the middle period such as “Highway 61 Revisited” and “Visions of Johanna.” These songs are too long and too demanding for people who are accustomed to listen to songs written in couplets about the agony and ecstasy of young love. For many people, it’s as though Dylan wrote these songs in code, so they give up on them.
I call this book Decoding Dylan because in it I follow the standard procedure of codebreakers and emphasize pattern recognition as a way of finding meaning in what was previously puzzling.. I show that it helps to make sense of Dylan by relating him to his cultural environment, namely New York in the sixties. It was in the sixties, that tumultuous decade, that Dylan revolutionized popular music, writing and performing the songs on which his reputation is based. That is why this book deals only with his songs of the sixtie.
Decoding Dylan follows chronological order by identifying some breakthrough moments during his early years in Hibbing, Minnesota, and then in Minneapolis, when he was enrolled at the University there. But his second, real life, began when he went to New York, where Bobby Zimmerman turned into Bob Dylan, and where hitherto unknown opportunities flooded his receptive sensibility, stimulating him to become a legendary singer-songwriter.
From this brief description it is obvious that Decoding Dylan is not a biography that describes his life in detail. Rather than isolating the subject, as American biographies tend to do, I treat the facts of Dylan’s biography and of his career in a broad cultural context. Although Dylan is a genius, and each genius is surely unique, it is nevertheless true that certain patterns such as birth order and ethnicity recur in the lives of high achievers in the arts. It enriches our understanding of Dylan if we match these specific features of his life to analogous features in the lives of the small group of his peers.