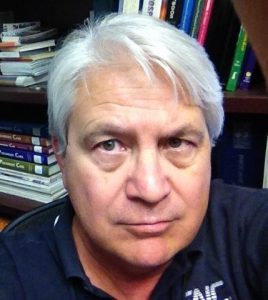 Author Bio:
Martin Roy Hill is the author of the Linus Schag, NCIS, thrillers, the Peter Brandt thrillers, DUTY: Suspense and Mystery Stories from the Cold War and Beyond, and EDEN: A Sci-Fi Novella. His latest Linus Schag thriller, The Butcher’s Bill, received the Best Mystery/Suspense Novel of 2017 from the Best Independent Book Awards, the Clue Award for Best Suspense Thriller, the Silver Medal for Thrillers from the Readers Favorite Book Awards, and the award for Adult Fiction from the California Author Project. His latest Peter Brandt mystery, The Fourth Rising, is due out in May 2020.

What inspires you to write?
I don’t know how to explain inspiration. I’ve been writing short stories and novels since I was in high school—not with a great deal of success back then. I sold my first published piece to Reader’s Digest when I was nineteen and in the military. I studied writing and journalism in college, and worked as a newspaper reporter, investigative journalist, and newspaper editor for more than twenty years.

I enjoy the act of writing. For me, it’s both meditative and cathartic. After a good writing session, I feel renewed and refreshed.

But I also have stories to tell. I read or hear something, and suddenly something goes click in my head and I start thinking, “What if…?” A story idea forms, grows, and eventually I need to sit down and write it.

Tell us about your writing process.
I am an outliner. I like to know I have a story to tell before I try to write it. I often compare outlining and plotting to preparing for a road trip—you look at the map and choose your destination and how you’ll get there. But once you’re on the road, you start seeing things you want to explore. You take a left turn instead of the right turn you had planned taking. Maybe there’s a road closure and you get diverted to another route. You still get to your destination, but not quite the way you expected.

I use two programs for outlining—Scrivener and Story Planner. I use Scrivener’s cork board to list notes and plan scenes using its electronic version of 3×5-inch cards. I also use it to hold all my research. As my plots are usually based on real world events, I do a lot of research. I use Story Planner to develop characters and develop more of the plot. It has a better user interface for that. Plus, I have Story Planner on my iPhone, so I can work on it anywhere I go.

Now having said that, I must confess I did not outline my latest book, The Fourth Rising, the third entry in my Peter Brandt mystery series due for release in May 2020. I was working on a new Linus Schag, NCIS, thriller but got bogged down. I switched to The Fourth Rising without really plotting it out. It was fun to write because I really didn’t know how it was going to end.

For Fiction Writers: Do you listen (or talk to) to your characters?
Who else would I talk to? I think it’s very hard for writers to describe their works in progress. At least it is for me. I can work my way through a book by viewing it from the eyes of the characters. In my book The Butcher’s Bill, part of my Linus Schag, NCIS, thriller series, I planned for one of the characters to die one way. When I got to that scene, however, it was like the character was yelling at me, “I wouldn’t die that way, you idiot. This is how I would die!” I listened to the character and wrote it the way he told me to. It must have worked, because that book ended up winning four national awards.

Who are your favorite authors?
That question is always difficult to answer. I grew up reading the Lost Generation writers like Hemingway, Dos Passos, Wilfred Owen, and Remarque. I’m of the Vietnam generation, and those writers seemed to echo what my generation was going through, too. But I also read authors like H.G. Wells, Ray Bradbury, Kurt Vonnegut, and others. Contemporary authors I enjoy include David Morrell, Jack Higgins, James Rollins, Bob Mayer, and Phillip Kerr. We lost a great story teller when Kerr died.

How did you decide how to publish your books?
I started out pursuing traditional publishing back in the 1990s. I had bad experiences with three literary agencies. Then 9/11 happened and I did a stint of active duty with the Coast Guard doing homeland security missions. At the time, I was editor of a business newspaper and I decided I didn’t want to stay in journalism any longer. I was hired as a Navy analyst in combat casualty care in November 2002. The following March we invaded Iraq and for the next ten years our op tempo was so high, I didn’t have time to write. When the Iraq war started winding down, I started writing again. That’s when I first heard about indie publishing. My wife, Winke, and I both have backgrounds in publishing, so I figured why not try it? My first book won an award and I never looked back.

What do you think about the future of book publishing?
I believe the book publishing industry is going through the same changes the movie and recording industries went through decades ago. Once a handful of movie studios controlled the movie industry. As the equipment used for making movies got cheaper, producers, directors, and actors went out on their own. The same thing occurred in the music industry. Today, independents make up major portions of those industries.

The book publishing industry today is a shadow of what it used to be. In the 1980s, there were dozens of large, U.S. publishing houses. Today, there are five, the so-called Big 5. That means there are far fewer changes to get a book published traditionally today. Of course, there are smaller publishing houses, but those frequently go out of business. A lot of mid-list authors are being dropped by their publishers and are turning to independent publishing to continue writing. Several big-name authors are buying back the rights to their back-list books and republishing them as independents. The one thing you must remember about indie publishing is that it is a business. If you approach it as an artiste, you won’t sell any books. If you’re not prepared to be your own publisher, promoter, and marketing department, you won’t make it in independent publishing.

What genres do you write?
Mystery. Thriller. Science Fiction.