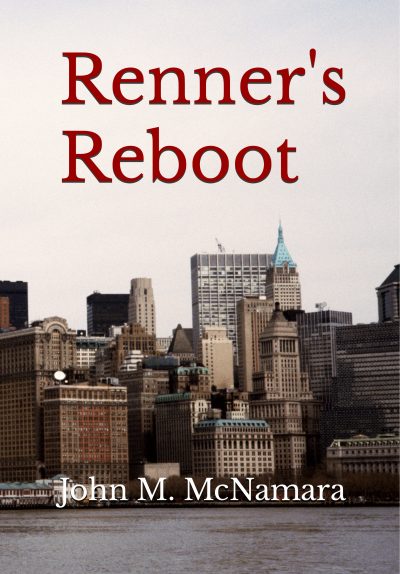 On the morning of 9/11, Benjamin Renner, late for his appointment with the client firm in the Twin Towers, commits to the unthinkable: let the world…his wife, his family, his colleagues…believe he perished in the horror of the morning. A phrase from childhood echoes: do-over, and its adult equivalent, reboot. Can he pull off such a deception? Help comes in the form of an older woman to whom he confesses his plan and who assists him for reasons she refuses to reveal.
Renner, now Jim Tanner, begins a fifteen-year odyssey, constantly on guard, crisscrossing the country on buses, never remaining in one place long enough for people to grow close to him. Coping with the challenge of maintaining an untethered life fosters guilt, paranoia, and loneliness. Living while looking over his shoulder taxes his determination, but he maintains the façade. He labors as a transient worker from the Pacific Northwest to Key West, accepting an existence disparate to his middle-class upbringing. During his travels, he writes journal entries, letters to his wife, to his family, which he never intends to send, as well as introspective letters to Eve, the woman whose beneficence enabled escape from his previous life. She saves each envelope in a trunk in her Brooklyn home.

He worries that his remains from the collapse of the Towers have never been located, but hundreds of victims remain unidentified.

His wife collects millions in 9/11 survivor benefits, remarries, and finally has children. They quarreled about wanting children. He wasn’t opposed to fatherhood, he simply didn’t want children with her.
His brother names a son after Benjamin. The depth of his parents’ grief remains a mystery, about which he can only speculate. When he worked as a management consultant, Renner embraced planning as a skill, as the essence of his nature. But Tanner enjoys no such luxury. Planning beyond the next day endangers his identity. This internal battle defines his new life.
Soon he discovers the accuracy of the adage: that people need people, that he is no exception. He forms tentative friendships, takes on lovers, the need for intimacy tugging at him, but severs every attachment when the urge to confess his transgression becomes too powerful.
At times he sits quietly, contemplating how in this new life, nicety and necessity conflict.
As the 15th anniversary of 9/11 approaches, Tanner visits Eve, whose health has declined, and while caring for his benefactor, questions whether he can or has ever separated himself from Renner.