You are here: Home / Bargain Books Under $3 / Air: Merlin’s Chalice by Meredith Bond 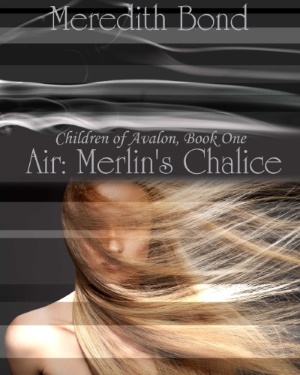 People are never what they seem.
Scai thought she was safe in her little Welsh village—until the people turned on her, threatening to burn her as a witch.
Scai thought that knights in shining armor were handsome young men—until an old man with funny ideas rescued her.
Scai thought magic didn’t exist—until she learned she was born with it.
Scai thought everyone showed their true face—until she saw otherwise.
But Scai is not a witch, despite her magic. Knights come in all ages and you don’t want to mess with one, no matter how old they are. There are people who want all the power they can get, and are willing to kill for it. And sometimes it’s worth it to risk everything you’ve ever known because you can discover amazing things, meet wonderful people, have fantastic adventures, and best of all, learn the Truth.

What Inspired You to Write Your Book?
This is the origin story for the Regency-set Storm Series which introduces the magical people called the Vallen to the world. But where did the Vallen come from? What their powers? How do they have magical power? This book begins the Children of Avalon series where we meet and fall in love with the first Vallen in England before the magical Isle of Avalon disappeared forever.

How Did You Come up With Your Characters?
The three "children" of the Children of Avalon are actually young adults trying to figure out life and where they fit into the world. They each have a fantastic destiny that they're trying to figure out and they are each tied to an element and embody that element: Air, Water and Fire. They have a guardian/mentor, Lord Dagonet, who is a knight of the original round table. He is based off of King Pelinore from The Once and Future King by T. H. White.

Book Sample
“Hiyah!” Galloping hooves raced toward me from behind. “Hiyah!”
I turned and stood frozen with shock. I knew I should get out of the way. I was about to get run down, but my legs wouldn’t move. My mind refused to believe that what I saw was real.
A knight in full, gleaming armor was bearing down on me, his horse coming at me at a full gallop.
I opened my mouth to scream, but nothing came out. I couldn’t breathe.
The knight continued to race toward me, his hand raised above his head clutching an enormous sword. He came closer, faster, raising his sword even higher, ready to strike me down.
I was dead. There was no point in moving because I was dead.
I just stood in the middle of the path as my death came closer and closer. At the last second, I closed my eyes and clutched my arms against my body.
The heat and the smell of horse invaded all of my senses. Galloping hooves came within inches of me. My hair flew in the gust of air. And then he was behind me.
He had gone straight past!
I spun around and watched as, with a great war cry, the knight struck his sword into the side of an oak tree. The sword wobbled up and down with the force of the blow as the knight let it go. He continued past until his horse slowed down enough to safely turn about and return.
Ignoring his sword, the knight rode straight up to me. “You all right? Tell me you aren’t hurt, wot?”
“What?”
“What, wot?” replied the knight.
“I…I’m sorry?” I looked past the knight at the tree where his sword was still waving gently.
“I’ve just saved your life, have you nothing to say?” the knight said, puffing out his chest.
“You have?”
The knight pulled up the visor on his helmet to stare at me.
Behind the shining metal were pale brown eyes crinkled with the lines of one who had spent a great deal of time smiling.
“I…I’m sorry. I didn’t…I mean, I hadn’t…er, thank you,” I said. Remembering my manners, I dipped into a deep curtsey. “Thank you, good knight, for saving my life.”
The knight gave me a small bow from atop his horse.
“Er…” I began, glancing back at the sword. “May I ask exactly what you saved me from?”
“What?”
“What was it that you saved me from?”
“Oh. Er, that, er…” The knight gestured randomly toward the tree. “That, er, oak.”
“The oak?”
“Yes. It was reaching out toward you and, er, oh, hobnobbit!”
A laugh burst out of me, releasing all the fear I’d pent up just a moment ago. For a minute there, I hadn’t been entirely certain that the knight was in his right mind, but clearly even he couldn’t keep up the pretense.
There had been nothing attacking me.
He laughed in great guffaws, leaning back so far that for a minute I was afraid he would lose his balance and fall off of his horse.
The horse sidled a little, making the knight sit up straight again and pull on the reins to control it.
“Well, now you’ve found me out, wot?”
“What?”