You are here: Home / Interviews / Interview with Author – Christian Kallias 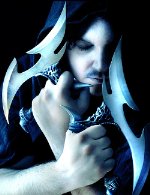 Author Bio:
I was born in Geneva, Switzerland, on a late night Sunday, back in the middle of June 1975.

My whole life I was always drawn to imagining stories. But it took me a while to do something about it. After sinking my teeth into video games, different artwork endeavors and even manga, I somewhat realized along the way that the best medium to express myself was simply the written word.​

I’ve always been fascinated with the stars and Science Fiction in general. A lover of classics (Star Wars, Star Trek, Babylon 5, Stargate,…), it was a no brainer when it came to choose a context in which to tell my stories. I also have fond memories of playing games like Wing Commander as a teenager, a fact that should be apparent in my depicting of dogfighting scenes.

I also write about what I think are important issues in our current civilization. Sure I might oversimplify it sometimes and paint a positive and utopian picture of what things could be if we woke up as human beings. If we put the humanity back into the equation. Not realistic? Perhaps… But I like to make you think, to ask yourself what if? What if we did things differently? What if we challenged the beliefs that were formatted into our brains as children, and try to envision something else for our future? But I won’t imply I am right with my questioning. I just have these questions and I like to share them with the readers, see if it tickles their minds like it tickles mine.

But in the end I write, first and foremost, to entertain. So for a little while you can be transported to a different world, and hope you enjoy the ride.

Thank you for reading my books.

What inspires you to write?
I’ve always been fascinated with Science fiction. My first love was Star Wars, Star Trek, Babylon 5, Stargate SG-1, Farscape, but also Wing Commander (games and movie), Dragonball Z, Saint Seiya and many others. I love space and always been drawn to the stars, and I keep imagining how worlds would be beyond Earth since I was a kid. When it became time to write a book, finding a subject was not difficult at all. It had to happen in the stars. My love for Earth made it so that I mixed both long range systems far away but also on Earth.

Tell us about your writing process.
Seat of the pants I guess. I do outline a little, but mostly in my head. I use Scrivener and Word mostly as software. I do not sketch my characters except in my mind.The very original characters came when I tried to create a manga style video games in the 90’s. It would have been called Retaliate and that’s when the characters started to take shape. They evolved , and even radically changed since then. I then started to make a Fantasy SciFi cross-over manga/comic book called The Kyrian Chronicles. I drew 30 pages in 2002 but the project was discontinued. Not long after I started writing this book, and instead of having a mostly Fantasy root with some SciFi, I went the other way around.

I usually outline the cycle (since I write series) or part of the story I want to tell. I then decide where it starts, and where it ends. I decide what are the most important elements that need to happen in between these points, and then also what personal trial will the character(s) have to go through within the book.

For Fiction Writers: Do you listen (or talk to) to your characters?
I do play them in my head, imagine the scenes they go or will go through as a movie in my head. But never really had a discussion with them until now, but I admit I find the notion quite intriguing. Thanks for asking this question, as I might just do that from now on and see how it goes. Part of my own psyche ends in my characters, I think some of their aspiration, fears, strength and weaknesses end up as their character traits sometimes consciously and sometimes unconsciously. Even revealing symbolism in my own existence I might not have seen at face value until I see it mirrored in my own books. I find writing to be fun but also therapeutic for my soul.

Who are your favorite authors?
Timothy Zahn and the Thrawn trilogy (which as just been removed from the canon of Star Wars, which is sad). But also Michael Moorcock and the entire Cycle of Elric. I love Frank Herbert books as well, and I’m currently quite fond of Pitacus Lore’s I am Number Four series lately.

How did you decide how to publish your books?
I went the self publishing way. First of all once the book was done, I wasn’t really looking forward to spend months or years until my book would end on the reader’s hand. So I went with Amazon and KDP Select. To my surprise it fared very well in it’s first two months, much better that I expected in fact. It motivated me to release my next book faster and I’m trying to not let more than 3 months in between book releases now. I also do my own art covers. I have been drawing and making CG graphics for the better part of two decades, even more if we count my pixel art on Commodore 64.

One of the things I love about self publishing is that I maintain artistic control of my work on every level.

What do you think about the future of book publishing?
I think the landscape is changing and I think it’s for the better. The fact that anyone can publish a book nowadays is a fantastic opportunity. It’s also a double edge sword and an open door to poorly edited books. I try to edit my books the best possible, using a copy editor and proofreaders, but of course there is always a mistake that creeps in there. The advantage of ebooks means you can correct that easily, though these correction don’t automatically go to the people who already bought the ebooks (at least on Amazon, which is a bit sad, but at least when a mistake is found and corrected, the new readers will get the corrected version).

What genres do you write?
For now Science Fiction (with Fantasy and mythology elements) and soon Heroic Fantasy