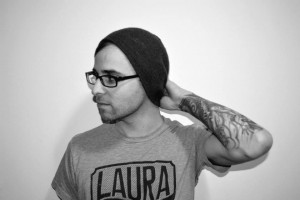 Author Bio:
A cliche writer, living the dream. Bryce David Salazar is the author of She Sees Metaphors. A Michigan native, he can be found roaming about the capital city with Chinese takeout and energy drinks. He has a thing for cats and telling cute stories about his girlfriend that will make you sick. When he isn’t writing or in the sick depths of a Netflix binge, you can probably find him working in some East Lansing kitchen.

What inspires you to write?
When I was a kid I used to have my mother sit at some old typewriter we had sitting around our basement, and I would dictate whatever silliness my three year old mind would come up with. This practice continued until I was old enough to write on my own, at which point mother was laid off. From there, it was silly adventure stories of prepubescent genius, embarrassingly awful poetry and lyrics for whatever high school band I was drumming in, and after all of that I was a blogging fiend in college. Naturally, a novel, or some failed attempt at one, was the common thread in the background during these phases. All of this is to say I haven’t the slightest idea of what inspires me. It’s always been something that I just did when the mood struck, same with eating or harassing friends to go out for the night. For She Sees Metaphors, I wanted to tell a weird story, and so I did.

Tell us about your writing process.
My writing process is rather boring, especially now that I’ve entered a point in my life where all vices are on trial. No cigarettes. No whiskey. Water is acceptable. Coffee and Red Bull are required if I’m writing in the early morning.

When I’m working on a draft, be it the first or the last, I set a word goal and I meet it. That’s about all of the planning I do. On average, it’s usually 1,000 words a day, but I have been known to go for 2,000 words. If I’m not feeling the juice, I’ll just slowly work my way towards the absolute minimum I can do without feeling lazy and then I’ll move on for the day. I repeat this process until the draft is done.

Naturally, life gets in the way of things and the streak is always broken sooner or later. I essentially quit my life as a novelist whenever a new Arkham game is released or a new series is introduced to me. For these situations, the solution is simple. I pick an arbitrary long weekend and request it off from my day job. I tell everyone I care about that I’m off limits for that time, barring death or a Chinese food drop-off. And for those four days I write on and off, morning until night. When the weekend is done I’m usually in a place to proceed as normal.

For Fiction Writers: Do you listen (or talk to) to your characters?
Never. Just about every character I write is some loose imitation of someone I’ve met. When I put a character into a scene I just run with what I figure that person would do. As the drafts go on the characters deviate from their real world counterparts and into something of their own, but I’ve met too many lovelies and freaks to not treat my social circle like some kind of unguarded fruit tree.

Who are your favorite authors?
David Sedaris and Glen Duncan.

I find the way David Sedaris can make just about any moment an entertaining read to be inspiring. You can find a story in anything. Were it not for him, my favorite chapter in She Sees Metaphors would probably be in a drawer right now. Glen Duncan is just filthy good sex on the page. He strings sentences together in such a way that I never could and the simple humanity of his work just hits home for me. Even when he’s writing about something like werewolf sex, I feel like he’s put everything he is onto the page, and that’s what I take away from him.

How did you decide how to publish your books?
Early 2014, I remember sitting around at Local Tattoo, the shop where I get all of my work done, waiting for my artist to get everything ready for my session. My phone went off and there was an email from a small publishing house in Texas that said they wanted to publish my book. I freaked out in front of my artist and stepped out to call my mom. The contract was signed and set soon after. For five or six months I just sat back on cloud nine, telling everyone that my book was going to come out sometime in 2015. I did very little else with it.

Then the day came where I received another email, this one informing me that some of their former managers had been ignoring certain steps in the review process and that my book actually violated their decency standards, which was a problem. Rather than ask me to edit, they cancelled my contract and told me that my book would not now or ever in the future be published with them.

My options were to either start over in finding a publisher or to self-publish. Since I had been telling people for the last five months that my novel would be out in 2015, I decided to self-publish through CreateSpace and stick to that promise. I talked to everyone I knew that was an artist, writer or photographer and started putting everything together from there. And honestly, I think the final product is better for it.

What genres do you write?
Literary Fiction, Magical Realism, Fantasy