You are here: Home / Buyer's Guides / Dani and the Outcast by R.E. Hargrave 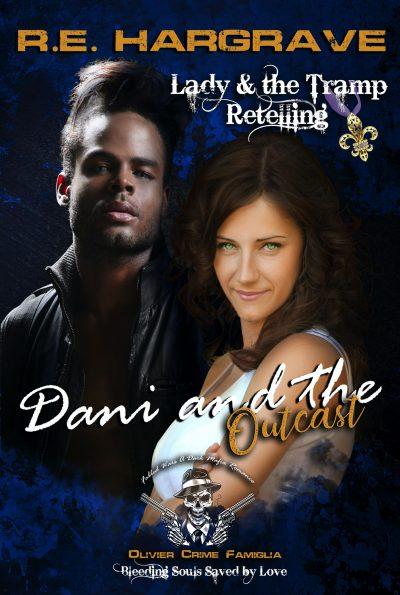 Dani and the Outcast by R.E. Hargrave

A princess.
A tramp.
A hunger for revenge.

Danielle Olivier has never wanted for anything material—some labeled her spoiled, a princess—and yet, she has a heart of gold. Unlike her father. Of course, as the head of the Olivier Crime Famiglia in Louisiana, he can’t afford to be soft. Or kind. Her station in life also means Dani has grown up under an ever-watchful eye. From private tutors to a driver, not to mention two nutty nannies with a penchant for 70s classic rock, she’s rarely had a moment to herself. When her father’s watch dogs aren’t hovering, her mother is—fretting and nitpicking Dani’s appearance, posture, fashion… anything and everything are fair game to her mother, including choosing her friends. It should be a fairytale existence, but if Dani can’t chase butterflies and fall down her own rabbit holes, dire consequences and all, the next best thing is to lose herself in simmering sauces and aromatic spices. And getting all the doggy cuddles from her best friend Dame.

Antoine Desjardins was raised by his maman and auntie in the 15th Ward of New Orleans. With no father figure urging him “to be a man,” he spent a lot of time in their small kitchen, watching, learning, and dreaming of bigger things. Brighter kitchens. Fusion flavors bringing not only palates, but people of all walks, together. Maybe even finding love one day. Young and full of life, working the French Quarter lets Juan set his own hours and decide how he wants to bring home the pay. How much of it gets added to his cooking school savings fund, however, depends on how hard he hits the pavement, and how many trades he’s Jack of. Not every day in the Quarter is peachy keen, though. Not when seen as a panhandler, and prejudice steers customers away from his dark skin and unusual accent. And not when having an ear to the ground sometimes uncovers things he’d be safer not knowing.

Returning from boarding school in France to the house Dani grew up in the Garden District may prove to be the excitement Dani has been looking for. Or it may bring the hardest lesson she’s ever had to learn. Things are different with her parents, and all clues indicate her father is up to no good.

Love hurts, and knowing who to trust, when feelings and judgement run deep, is almost impossible to do.

Bleeding Souls Saved by Love! A Fabled Retelling of LADY AND THE TRAMP

What Inspired You to Write Your Book?
Dani and the Outcast is the January 2022 Mafia installment of the Bleeding Souls Saved by Love! Collection of MC and Mafia-style fable retellings. When we were invited to the collection, we were allowed to choose which fable we wanted to retell and which state we wanted to set up in. Lady and the Tramp was always a favorite of mine as a child, and as an adult, I adore New Orleans, LA, so jumped at the chance to blend the two.

How Did You Come up With Your Characters?
Since this is a fable retelling, I was able to loosely base my human characters on the loveable animals from the original version.

Book Sample
Now alone in his office, Scott turned his attention to Marcel, to discuss the real business at hand.
“What’s on the agenda for today?” he asked, taking a swig of his beverage. The chicory was growing on him. It wasn’t the delicious double French roast he loved so much, but his physician had warned him that if he didn’t make some changes to his habits, his ticker was going to stop tocking sooner than later. With no caffeine, and all the added health benefits, switching to the intensely flavored hot drink had been one of the easier modifications. Giving up his Cuban cigars and top-shelf aperitif fixings, not so much.
Marcel tapped on his phone, scanned the screen, and then reported, “You have a ten a.m. with the New York investors for the Faubourg Tremé project.”
“Good, good. Are they ready to sign?”
“Yes, sir. With contracts signed by the last holdouts on Esplanade Avenue who were, shall we say, convinced,” he coughed, “to sell and clear by month’s end, the investor is a full go. Lunch is booked at Gautreau’s at one, and yes, the duck confit has been ordered to celebrate finally closing this deal. You have a cardio session with Stan at four p.m., massage at six with Penny, and dinner is at eight. Mosca’s. Reservations include you, Mrs. Olivier, Danielle, me, and the Chicago boys, who should arrive by eight-thirty. Lydia’s boys will be on door duty.”
Scott locked eyes with his longtime friend and confidante.
Marcel swallowed. “How do you think she’s going to take it, sir?”
He shook his head right as Lydia knocked and then opened the door to announce breakfast was ready.
“I don’t know, my friend. I really don’t know. Tonight, will tell.” He stood. “Shall we eat?”
His wife’s huff was audible as she turned to leave. Scott watched her. He knew Lydia’s opinion on this matter, and while she didn’t agree—she wanted Danielle to attend University in Italy, like she had—she couldn’t stop him moving forward. Once, he’d loved Lydia, but the years hadn’t been nice to their relationship. Now, it was hard to look at her without remorse. Some of it for loving her in the first place, some for using her, but mostly because of Danielle. His beautiful daughter was the best thing he’d ever done in his life and, ultimately, would also be the worst.
Chicago, one of the oldest crime famiglias in the States, wanted a merging of families.
While Scott had never gotten absolute confirmation, he wondered on occasion if his secret wasn’t his and Marcel’s alone. If he was right, and the Chicago boys knew what they’d done all those years ago, then he was done for. His dynasty would be no more. But if he was wrong, well… this was his ticket to the big time, to prove one didn’t have to be Italian to be a successful mafioso. A Frenchman could handle the job. The price of entry?
Danielle.
Scott had offered her to protect his legacy, and whether she liked it or not, for the Famiglia, Danielle would obey.
No one told Scott Olivier “No.”