You are here: Home / Featured Books / A Gift Most Rare by Tom Leihbacher 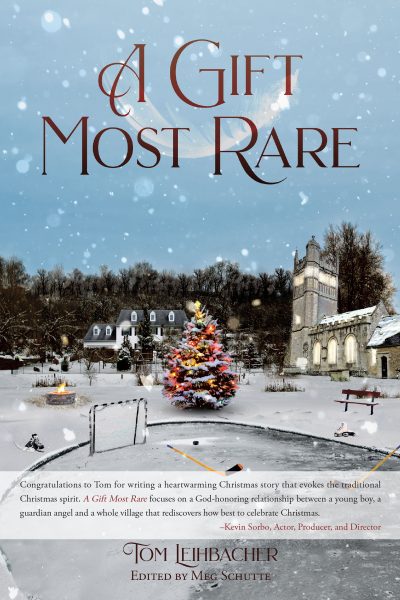 A Gift Most Rare by Tom Leihbacher

It’s Christmastime in the handsome, pocket-sized village of Briarcliff Manor, New York. Multicolored lights cast a merry glow, the scent of fresh evergreens infuse the air, Christmas carols are heard on each street corner and stores are bursting with jolly, gift-buying shoppers.

With the yuletide spirit in full swing, life in this Rockwellian setting seems picture-perfect. But not everyone feels the holiday cheer. Nor do the seasonal sights, sounds and pastimes make much of a difference for them.

While most go about their joyful holiday pursuits, young Charlie Riverton is restless. His good-natured, twelve-year-old heart is especially concerned for the lonely and forlorn.

At the same time, he’s a red-blooded American boy and unofficial leader of a particularly close-knit group of sixth-grade buddies. Each day, they ramble through the full range of pre-teen hijinks, including how to navigate their new and nerve-wracking interest in girls.

Meanwhile, there’s an unusual and curiously gifted newcomer in town, recently arrived on the tailwinds of a surprise Thanksgiving Eve snowstorm. Charlie felt a special affinity with the handsome stranger from the moment they met.

Together, they set out to craft a God-honoring Christmas gift for the whole community. Along the way, lives are changed and people begin to look at Christmas a little differently.

What Inspired You to Write Your Book?
My main goal was to write a God-honoring Christmas story. So this particular effort will appeal to anyone who might be looking for a heart-warming Christmas tale with an emphasis on faith, family, friends and community.

Within that context, I tried to write in a way that would evoke what we tend to associate with the traditional Christmas spirit. In the process, my hope is that the story will transport people to a time and a place where things were simpler – and maybe a little more together…a little more down to earth.

The central message of the book is Redemption through the Christmas event. Redemption and atonement for the life to come – and redemption for the lives we’re living here on this earth right now.

There’s a lot of emphasis on the arrival of the Messiah, but there also is a character or two who go through God-inspired, life-changing experiences from which they emerge renewed, reconditioned inspired to move forward to a better life.

Secondarily, the story is also an authentic period piece and coming of age story set in the early 1970's.

How Did You Come up With Your Characters?
The setting for the story is my hometown of Briarcliff Manor, NY. Some of the characters are completely fictional; some have characteristics of people I've known and some are actual people who were a big part of the Briarcliff community.

You are the God who works wonders; you have made known your might among the peoples.
—Psalm 77:14

Whether we realize it or not, God’s celestial intentions are always stir- ring in wondrous ways that answer prayers and change lives forever.

Such was the case one Thanksgiving Eve in Briarcliff Manor, a pocket-sized village in the pastoral midlands of Westchester County, New York. Heaven-fated happenings were afoot and holy phenomena were set in motion during the still hush of the overnight hours.

The stealth way in which an undetected snowstorm secreted through the great Hudson Valley was nothing short of baffling. To this day, no one has fully explained or adequately described the unusual event.
Flurries began to fly on cue soon after everyone had tucked in for a late November night’s sleep.
Completely unforeseen by local weather forecasters, the storm seemed to tiptoe in from out of the blue.
The Scarborough section of town stood like nature’s rampart, rising up from the weathered edge of the Hudson River. It took the windswept brunt of the storm. Meanwhile, the valley area of the village consented to the lion’s share of the whiteout.

Accumulations were mystifying. By the time the bells at St. Mary’s Episcopal chimed one o’clock in the morning, a foot of the most pristine, sparkling snow had accumulated with more yet to fall. The clandestine storm cast a charmed tranquility over Briarcliff ’s hills and dales. The air took delivery of a fresh, uplifting scent while powdery snow dusted the evergreens and coated the ground with smooth, unspoiled contours.

Caught completely off guard, people awoke to a holiday scene worthy of the best-ever by Currier & Ives. As preparations for Thanksgiving dinners began in one house after another, everyone was filled with the most curious sense of delight and fascination.

Stammering sentence fragments dominated morning conversations between family and neighbors. People greeted each other like giddy school children, unable to fully complete their thoughts on the sanctified incident. Later, as locals gathered for traditional turkey dinners, people bantered on endlessly about the first snow coating of the season.

True enough, it had been colder than normal. In fact, Gooseneck Pond, over in Law Park, had already attracted hordes of skaters and hockey-playing teenagers. Still, no one could ever remember being kept from backyard football games on Thanksgiving Day because of thigh-deep snow.

With the early arrival of this seasonal delight, fireplaces began to glow. Houses that had been craving their families long-lost to out- door activities, began to come alive with warmhearted goings-on.

Much to its chagrin, the local weather service was completely bewildered by the wintry blast. Some felt the sudden whiteout came as a result of an abrupt change in the wind out of the north. Others saw it as connected to some odd occurrence of the lunar cycle. Most were content to chalk it up to the whims and quirks of winter’s prelude.

Even so, a few perceptive people recognized something special was in the air. They sensed God’s invisible hand reaching down to stage-man- age the beginnings of a simple blessing across their quaint village.

Although the unusual origins of the “Blizzard of ’72” could be debated, no one ever disagreed that it seemed to shepherd in a string of events that resulted in an inspired change in the hearts and minds of Briarcliff Manor residents. These were not just external changes. They were heartfelt and forever altered the ways in which those who dwelled there honored the Christmas event each year.