You are here: Home / Bargain Books Under $3 / The Modest Proposal Institute by Paul James 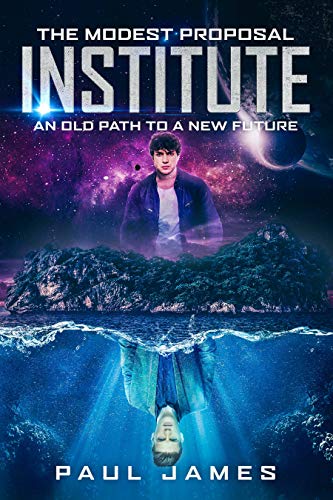 The Modest Proposal Institute’s Founders are looking for a return to mankind’s past inventiveness, which they see being lost. Their belief is justified when their teenage pupils become men who use their programming skills to amass fortunes before heading out into space and down to the ocean floor. Books 1 – 3 are now 99 cents. Book 4 debuts June 4, 2020.

What Inspired You to Write Your Book?
Boys have been doing badly at schools in the West since changes were made to the educational system to help girls, who did less well in the system built for boys. I see this divergence showing up in many areas of life today and felt a story about a return to the old ways for boys could be the saving of our societies. However, it could also lead to a parting of the ways between those who wish to go forward as explorers and those who stay home. And that's the theme of The Modest Proposal Institute.

How Did You Come up With Your Characters?
I chose character types that I saw as being the kind of young men that used to exist, adventurers, focused driven researchers, warriors, dominating business and politicians, and so on. They thrived in the world before today and have no place to call home now. I built the characters to model the types.

Book Sample
Alexis knew this book by heart—even now, more than a hundred years after first reading it. The transparent case he’d carefully retrieved the relic from was dusty and cracked, but the slim volume inside was unmarked by time and neglect. Its paper was dry but surprisingly supple, which suggested the vacuum seal of the case could only have been broken recently. He smiled as he gently flipped the pages, skimming through the headings and well-known phrases. After all, he’d had to read and write seemingly endless essays on its contents for all his time here in this, the first, school.

The school today made Alexis frown as he looked around the abandoned, derelict room that had once been so full of excitement and, he now realized, hope on the part of his grandfather and the author, Dean Swift. His frown turned to a quiet chuckle at the memory of Dean’s answer when he’d been asked about his name. Dean’s father, a Gulliver’s Travels fan, had saddled his son with a name that would likely only cause him annoyance throughout life. Fortunately, Dean had been born late enough in Britain’s slow decline that the problem hardly arose, simply because most of his peers were too ill- educated to have ever heard of the literary Dean Swift.

“The ship is on standby, sir,” Captain Harriman said, entering the room and breaking into Alexis’s thoughts.

“I appreciate your concern for me, the crew, and your ship, Captain,” Alexis replied, “but this stop is the sole reason for my trip. I don’t think we need to worry too much about our safety, for our enemies are too weak now to be a real danger to us. Still, to your point, I will be as quick as I can.”