You are here: Home / Bargain Books Under $3 / The Biggest Bounty by Brian Koscienski and Chris Pisano 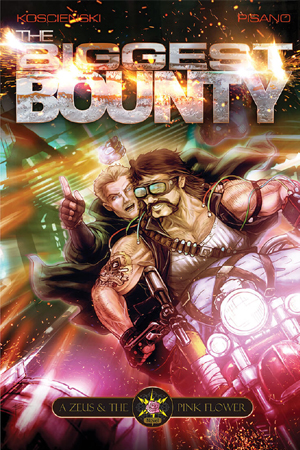 The Biggest Bounty by Brian Koscienski and Chris Pisano

Fiore is the (chemically enhanced) muscle; Zeus is the (super-genius) brains. Together, they’re out to become the greatest interstellar bounty hunters ever. Along the path to fame and fortune, they’ll accumulate contacts, partners, and enemies without meaning to. It’s all part of the job as they chase the biggest bounty the galaxy has ever seen while trying to best rival bounty hunters, including one so feared and respected he is simply known as The Legend.

What Inspired You to Write Your Book?
Bounty hunters hold a special place in the hearts of many people. The ability to act upon your own set of morals without the potential oppression of suffocating laws holds a certain appeal. Then add the extra freedom of easy space travel with the ability to hop from world to world and interact freely with different species and cultures? Some might consider it paradise. We wanted to explore that. Plus, we've both watched Star Wars about hundred times.

How Did You Come up With Your Characters?
For a good partnership, there have to be quite a few commonalities between the two people involved; for a compelling partnership that people want to read about, there have to be quite a few differences between the two people involved. Fiore and Zeus want to be the best bounty hunters possible because they view the profession as a form of law enforcement where they can help remove criminals from society. Fiore is more of the loud, brash, jump feet first bounty hunter seen in many comic books and anime while Zeus is far more cerebral. And the two have a good deal of secrets that they're keeping from each other.

Book Sample
Time froze for Zeus. Everything just stopped.
In the past few days, he had found the adventure he'd sought in his life. Not quite in the ways he had imagined, but adventure hardly came as one might expect. But he never expected to be jumping out of a window, willingly inviting a three-story plummet, hand-in-hand with a rival bounty hunter. This moment was one he would never forget, assuming he survived any longer than the few seconds of descent.
He didn't breathe; couldn't. His heart didn't offer a single beat. Neither sweat nor chill could be measured. He heard nothing. Just one frozen image of being almost thirty feet over the packed stands of the small arena.

Links to Purchase eBook version – Click links for book samples, reviews and to purchase
Buy this eBook On Amazon
Buy this eBook on Barnes and Noble for Nook