You are here: Home / Fiction / Interview with Author – Ken Williams 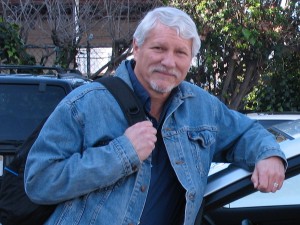 Author Bio:
Ken Williams worked as a social worker for the homeless, primary the mentally ill, but including veterans, women, the elderly, drug and alcohol addicted and the physically disabled in Santa Barbara CA for over thirty years. His dedication to his clients has been acknowledged by the Board of Supervisors, the State Senate, State Assembly, A.C.L.U. Santa Barbara Chapter, Housing Authority, California chapter of the National Association of Social Workers, Mental Health Association, Salvation Army, Catholic Charities, National Council on Alcoholism and Drug Abuse and others. The late Paul Walker highlighted his work in the documentary, SHELTER which Paul produced. His writings include the novels: CHINA WHITE, SHATTERED DREAMS, A STORY OF THE STREETS and his current release, FRACTURED ANGEL. THERE MUBST BE HONOR is a non-fiction collection of his writings interwoven with his autobiography. His work has appeared in numerous media outlet. He is a combat Marine veteran of the Vietnam War.

What inspires you to write?
I believe that I owe it to the thousands of clients, of which hundreds died during the time I work the streets of Santa Barbara: From the elderly veteran crawling across a homeless shelter to a baby who died on those cruel streets. To those who took their own lives, were crushed by trains, saw their hope vanish at the bottom of a whisky bottle or the tip of a needle. To the numerous veterans who left their will to live on distant battlefields and the mentally ill who fought their own minds for sanity. The travesty of homelessness must be exposed. The homeless have every right to be protrayed as something other than fodder for the hate of some and the neglect of most. And I write to cope with the demons of war. Also, because I am driven. Poetry, screenplays, novels all become a home away from home in my mind. A writer writes because that is who we are and what we do.

Tell us about your writing process.
I don’t follow an outline. I have written ten novels. Each one took on a life of their own once I began the process of writing. Not a single one didn’t grow with its own internal logic. I do use notes and do use character sketches very minimally. But mostly the characters grown within the novel as people do as they live their lives. One needs to listen to the voices within as will as those on the outside.

For Fiction Writers: Do you listen (or talk to) to your characters?
I hear their conversations and I do talk to them. The characters are part a composition of many, many people I have known. I have interacted with saints and sinners sometimes in the same person. My normal working days included homeless shelters, soup kitchens, camps, isolated individuals divorced from society. My circle of friends for three decades were mostly the severally mentally ill. They and their voices visit me every single day.

Who are your favorite authors?
John Steinbeck. I loved his novels. Naomi Klein is one of the smartest persons I have ever read. I Never Promised You A Rose Garden changed my life and set me on my life’s path of working with the mentally ill.

How did you decide how to publish your books?
I published three books with iUniverse. They were professional and easy to work with. Derek Vasconi, the owner of Sakura Publishing contacted me after I had queried him. He was very honest. He was, and is one of the easiest professionals in the field I have met. And, I of course have high hopes of a major publisher coming along and picking up the self published books or my unpublished novels.

What do you think about the future of book publishing?
People are always going to read be it with a book or tablet. But I think the mainstream publishers need to remember that they had a noble cause to uphold. It’s not all about making money or promoting fame. Books need to challenge the status quo. I think they forget that very often and look for the quick profit turnaround. They leave a lot of great novels unpublished because they are too isolated within their select circle. People have died the world over for the right to publish what needs to be read. Here, we merely kill the rebel with indifference. Our society is cheapened when media worships fame and glory and profits above all else.

What genres do you write?
I write fiction, speculate fiction, reality based urban fantasies.