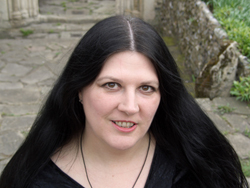 Author Bio:
Jaq D Hawkins was originally traditionally published in the Mind, Body, Spirit genre, but moved to indie publishing soon after releasing her first Fantasy fiction novel. She currently has five novels released and two more in progress, as well as further writings in Mind, Body and Spirit subjects, some of which continue to be traditionally published while others are destined for the indie market.

What inspires you to write?
Everything inspires me to write. Ideas pop out of any little comment or random thought. If I could write all the stories I have in my ideas folder… I’d be at least 500 years old.

Tell us about your writing process.
I’m a hybrid. I get an idea and start writing, then plot points start falling into place in my mind and I write them in a notes file, which I look at between chapters. My characters develop as I go along and reveal themselves to me as they do to the reader. I generally keep a retrospective outline file to keep track of what has occurred in what chapter and plot points that need to happen, but it gets adjusted a few times during the course of a book.

For Fiction Writers: Do you listen (or talk to) to your characters?
I don’t hear voices or interact directly, but during the writing sessions I’m living inside their heads. That can be weird when it’s the bad guys.

Who are your favorite authors?
Old favourites include Anne McCaffrey and Roger Zelazny, but a few newer authors have been getting my attention. In Horror, Graeme Reynolds, Jeff Brackett and Austin Crawley; in Fantasy Christopher Kellen, C.M. Gray and Paul Dale; in Historical Fiction, Charlton Daines, Susan Kay and Elizabeth Chadwick; Neil Gaiman in all of the above; in science fiction Alistair Reynolds.

How did you decide how to publish your books?
I have a traditionally published history, but around 2012 my fiction was with a small publisher who was not getting U.S. distribution and I noticed the growing self-publishing industry. It took some mental adjustment to differentiate this new facility from vanity publishing, but I got through that wall and would never turn back.

What do you think about the future of book publishing?
I see the rising standards among indie publishers and expect that a self-filtering process will give readers more confidence in indie published books. There is a visible trend of traditionally published authors releasing at least some books themselves and the lower hobby writers are beginning to drop out in frustration.

What genres do you write?
Fantasy and Steampunk.