You are here: Home / Interviews / Interview with Author – Janna Yeshanova 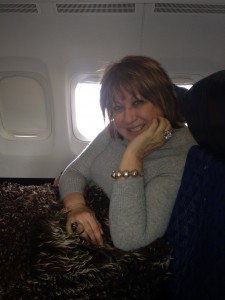 Author Bio:
Originally from the former Soviet Union, Janna Yeshanova escaped to the United States when persecution became violent during the crumbling of the Soviet state. Arriving in the United States with her mother and daughter in tow, $126 in her pocket and knowing not a soul, Janna’s talent and experiences have helped her become a high end organizational training and development professional. Her exodus story is included in the book.

Founder and principal of Life-Spark, LLC, Janna is a dynamic and powerful life coach, premier trainer and motivational speaker. She leverages her passion and engaging style to help others to overcome adversity and spark the possibilities of their lives.

Love Is Never Past Tense… was published first in Russia and Ukraine in 2009, and is now available in English. It is a fascinating adventurous romance based on a true story.

What inspires you to write?
Emotions, strong reaction to one or another event in my life, something that I can share and people can learn from it, and I can learn from it as well. It could be a book or a movie that contributes to my inspiration and becomes a catalyst. Love Is Never Past Tense has similarities to some of my favorites.

Like The Notebook, this is a story which stretches over a lifetime. Both books start with the couple having a summer romance, and both couples are torn apart by interfering parents who disapprove of their child’s selected partner.
Like In The Time if Cholera, it is a story of frustrated love that spans the adult life of the couple involved. Unlike it, this is not a love triangle story. Both are essentially second chance romances. Both books use the characters as a lens to examine their respective cultures.

Like Gone With The Wind we see a society collapse through the eyes of a generation growing up in privilege before tragedy struck, working to adapt and survive when the world changed around them. Both books rely on a strong female leading character.

Like Same Time Next Year it is an intimate love story which focuses on the primary couple. All other characters are given minor roles. Both stories stretch over decades.

Like The Master and Margarita it has its origins in Soviet culture and connects to events in Soviet times, though these are later rather than earlier Soviet era. For this reason, there should be a large overlap of readership. Both stories are heavily influenced by the bureaucracy of the government. Both books tell their story through several connected threads, which makes classifying them by genre a challenge.

Like Doctor Zhivago it is a complex second chance Russian romance which reveals the culture of its time and society through the eyes of the central couple.

Tell us about your writing process.
The story started as a journal and was reworked on paper, in my native Russian language. The first version was published in Russian. Getting it to English required translation and editing on a computer.

Back in Russia I was an editor and I was teaching Russian Language and Literature at a college. I was writing in my spare time. I like personal connection with the paper and the text that is running out of the nib of the pen. Suddenly, I realized that I have a bunch of pages. Then, when I saw so many pages, I thought that they could become a book.

This is what happened with Love Is Never Past Tense.

Who are your favorite authors?
Most recently, I’ve enjoyed The Alchemist by Paulo Coelho because it is a simple story with a significant message.

Russian classics like Tolstoy, Dostoevsky, Pushkin, Turgenev and later Michael Bulgakov contributed to my development. Gabriel Garcia Marquez, Salinger, Hemmingway shared with me so much through their pages that they became my life friends. Haruki Murakami has space for his books on my shelves.

How did you decide how to publish your books?
Love Is Never Past Tense belongs to a very unusual and hard to classify genre. It is part romance, part adventure and part historical romance, reflecting real event that shape the world. Traditional publishers don’t have an obvious shelf to put it on and very possibly would want to introduce changes. As a result, my books are self published..

What do you think about the future of book publishing?
I don’t see either traditional or self publishing going away. Traditional publishers may specialize and they will need to find new ways to operate, but they have a place for the foreseeable future. Self publishing keeps lowering the technical barriers for the increasing number of people who want to publish. As for the Internet, it is creating new ways to publish and distribute.

Ebooks and paper books both have good reasons to exist. Technology adds new options, but it rarely kills the older ones. Books are your friends. Sometimes you want to talk to them in privet. Sometimes you want a connection that only touching pages can provide.