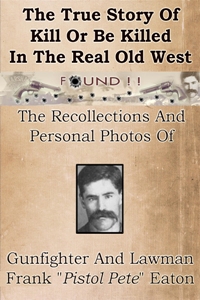 About Featured Book: The True Story Of Kill Or Be Killed Shootouts In The Real Old West by Frank “Pistol Pete” Eaton

Recently discovered memoir by one of the Old West’s most feared (but virtually unknown today) gunfighter’s, hired gun regulators and lawman is a time capsule that puts you behind a pair of Colt .45 six-guns and immerses you in the real life man-on-man fast draw shootouts, hell-bent-for-leather outlaw chases and lead dodging narrow escapes in the Old West.

If you’ve ever wondered what it was like to strap on a six-gun, walk out on to the dusty street in Tombstone or Dodge City and have a face-off-in-the-street gunfight where only the fastest gunslinger walks away – – then this rare eyewitness account of what it was like to live and die in the real, raw, Wild West is a must read.

“The book is great. I have read other so called real west books and a few magazines, but this one tops all the others.”
Franklin Foster, Warwick ,R.I.

This Memoir is available in these Formats: eBook, Print