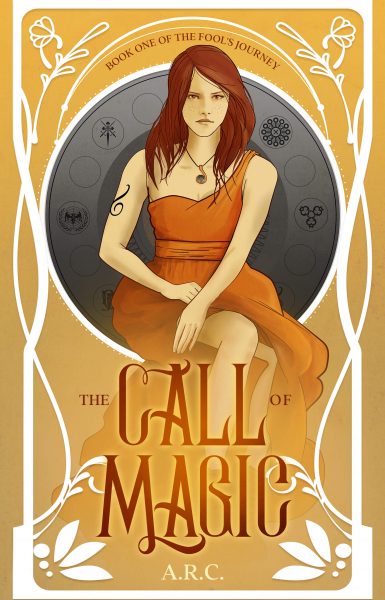 About Featured Book: The Call of Magic – Book One of The Fool’s Journey by A. R. C.

Freshly graduated from high school, EMMA LIE has never let go the betrayal her father served her. On the eve of her college departure, burdened with grand designs, Emma finds herself branded by a strange mark.

Bewildered by its appearance, Emma becomes distracted, then suspicious, of a captivating boy named THIES KRAUSMANN. Suspecting he bears the same symbol, she brings him closer and, amid a passionate moment, demands the truth from him. His cryptic answers skew her reality forever. Magic is real. The impression on her arm is an invitation by FATE.

Called by magic, invited by Thies and his mysterious colleague, Emma refuses their offer to join a cabal of magicians.

An unknown assailant chooses that hour to strike, and Emma is thrust into the world of magic, stolen away from her home even as the aggressor orders the kidnapping of her mom.

They’re transported to the Citadel, the stronghold of the magic Legion. Emma seeks reassurance from Thies, her only lifeline in that strange city. Compelled to trust him, pressed through Orientation, and shown the terror of the Merim, Emma wants nothing more than to return to her life. The secret war being waged by the Legionnaires beyond the Well in the Land of Magic is not her destiny.

She is told by the HIGH PRIESTESS that she cannot return. She is a recruit, now, bound by blood.

Lofty intentions derailed, her mother in mortal danger, and forced into military servitude, Emma struggles, resenting her captivity. Within hours, she alienates the other recruits and, resisting their overtures of friendship, plots escape. Rebuffing Thies’ attempts at romance, pushed to his side by the brutal training regimen, Emma battles for her own heart just as she fights for survival.

Battered by periods of torturous instruction, she finds herself losing ground. Thies is persistent. The moments they shared before her forced entry into the Legion were a reality she never imagined could be hers. Still, she plans desertion.

Strange things occur in the Citadel. The Legionnaires hold her suspect, THE PROFESSOR follows her in the hallways, and a magical parasite has escaped the Land of Magic. When Emma stumbles on a means of escape, her intentions to flee bear fruit. She must find the time and power to explore a mysterious set of tunnels. Days pass, and though Emma had originally shut herself off from friendship, she finds her teammates are as persistent as Thies. Her feelings for Thies intensify, but she cannot abandon her mother, or the life she had planned.

Emma is ordered to help clear the dangerous parasite. In a show of tremendous magic, the parasitic goop forms into a man-shape, claiming it will find her just as she and her companions annihilate it with their combined powers. Yet remnants of the slime are discovered after. It has not yet been destroyed as they had hoped. Despite this setback, Legion life must go on.

In Legion rite, Emma is paraded before the veterans at a ball. Dressed to perfection, plied with alcohol, Emma’s heart gives in. She and Thies fall into love.

In the hours after, Emma is caught in her daily attempts to escape.

Imprisoned, struggling against Thies’ heartbreak, Emma is forced to explain her actions. She learns that the parasite has become aggressive, that it is sentient, even. At the promenade, it abducted one of her teammates. Those who were closest to her disappear one by one.

It comes for Emma, but is driven away.

Intent on saving her friends, with Thies at her side, Emma agrees to act as bait, engaging in a dangerous mission. She joins the High Priestess and the Professor, racing against the opening of the Well. When Thies is captured, Emma has no choice but to chase after him. They enter the Land of Magic.

Confronted by the parasitic extension of a Merim’s power, the pair engage in a desperate battle against a powerful foe. And just when they have won an astonishing victory, another Merim arrives.

Emma dispatches the proxy of the first, and the second Merim disappears. Thies lies on the ground. Though unwounded, he rises inexorably into the sky. Fearing for his life, Emma clings to him with desperation, but is knocked unconscious. She awakens to a world without her love.

Unknowing whether Thies is dead, she vows to return him to the land of the living.

The Fool's Journey, a massive new series written in two parts – with blog posts acting counter-point to monthly-published novels – revolves around a cabal of warrior mages, and focuses heavily on the inclusion of Tarot.
For more information, visit A.R.C.'s website at https://quickandanimus.com/books?utm_source=106

This Fantasy book is available in these Formats: eBook