You are here: Home / Bargain Books Under $3 / Featured Book: American Schism: How the Two Enlightenments Hold the Secret to Healing our Nation by Seth David Radwell 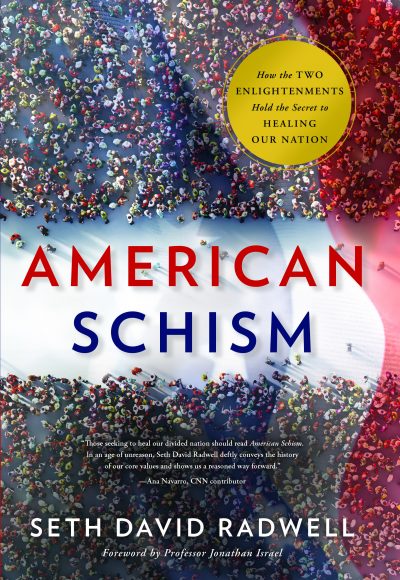 About Featured Book: American Schism: How the Two Enlightenments Hold the Secret to Healing our Nation by Seth David Radwell

Limited time ebook price of $0.99 throughout the month of January 2022.

An enlightened exploration of history to unite a deeply divided America

Two disparate Americas have always coexisted. In this thoroughly researched, engaging and ultimately hopeful story of our nation’s divergent roots, Seth David Radwell clearly links the fascinating history of the two American Enlightenments to our raging political division. He also demonstrates that reasoned analysis and historical perspective are the only antidote to irrational political discourse.

American Schism begins with a quick reintroduction to the pre-Enlightenment Middle Ages and then takes readers on an in-depth journey through the revolutionary Enlightenment period including the eventual schism that began in Europe but then found its way to American shores. Radwell shows the impact of this schism on American history from the early expansion of the U.S. through Jim Crow and The Age of Trumpism.

In an optimistic and rigorous final section, Radwell lays out an analysis of our current governmental structure and a plan to move forward, demonstrating that it is only by embracing Enlightenment principles that we can build a civilized, progressive, and tolerant society – where Americans can firmly ground their different views in rationality.

This Non-Fiction book is available in these Formats: eBook, Print, Audiobook