You are here: Home / Bargain Books Under $3 / Curved Space to Corsair by Jemima Pett 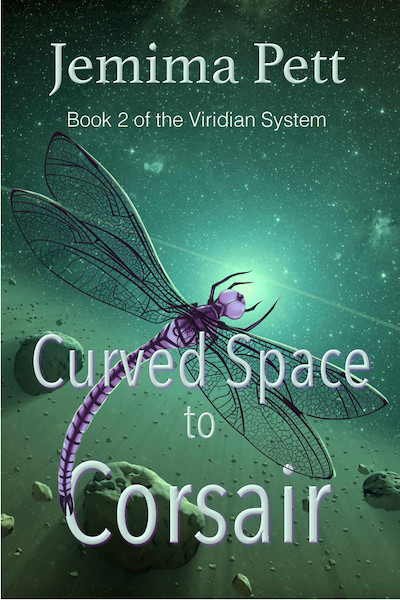 Corsair: a planet in thrall to the Imperium. The Imperium: a dictatorial oligarchy which likes to think it’s benevolent.
The remnant of Corsair’s population have sent out a message for aid, for someone to rescue them… and Pete Garcia is ready to answer their call.
Big Pete and the Swede, as they call the two Viridian System asteroid miners, decide to take Dolores and Maggie on holiday, and give Dolores more practice in how to be a space pilot. A course error takes them through a wormhole, into unmapped space. Will they ever get back to fulfil Pete’s mission?
Meanwhile the Imperium declares war on the Federation, while a little personal business by one of the senators leads him off in the direction of the Viridian System to start a canny land grab.

What Inspired You to Write Your Book?
As the first book in the series had my two asteroid miners chasing around the galaxy searching for pieces of a legendary weapon, it made sense that there should be some use for it when they found it. Besides, the girls' story had developed during the first in the series, and I wanted to explore their motivations and attitudes more.
I discovered that on the far side of the universe, interpersonal relations can get both cold and overheated.

Although this book is complete in itself, there is always a question of what happened next? Do they all live happily ever after? So there'll be a third in the series.

How Did You Come up With Your Characters?
Big Pete and the Swede are roughly based on some friends from college. I don't suppose they are much like those real people now, but I'm sure, if the men knew, they'd be flattered. Where the girls came from, I have no idea. What's interesting to me is the way they emerge from the total domination of the industry they have been in to discover their own talents. Fortunately their miner partners are proud of them and support their growth.
As for the baddies in this book: I found it remarkably easy to write dialogue for slimy politicians.

Book Sample
It had only been the second night after the wormhole incident when Pete had cuddled up against Dolores’ back, traced the curve of her body with his finger, and nuzzled her neck. Dolores had shifted her shoulder as if a fly had settled on it. He put his hand over hers and hugged her to him, nibbling her shoulder. She turned to face him but shifted so there was space between them. He tried a kiss, but she drew back.

“Is that all you think of?” She turned over again.

“That’s okay. I just thought it might help,” he mumbled to her back. Giving a girl her freedom had its drawbacks.

Lars admitted that Maggie’s response had been “how can you think of sex at a time like this?”

He had not replied that this was precisely the sort of time he’d think of sex, when everything else was up the creek without a paddle. Pete had laughed when he told him.

“I know exactly what you mean. At least we could enjoy still being alive.”

“I suppose it might be a slow death, though,” Lars replied, returning to the mood of doom that enveloped them all.

“It’s all a slow death, Lars, from the day we were born.”

“Look at you, the super-optimist. If you hadn’t had Dolores drop out of warp by those wormholes we wouldn’t be in this mess.”

Pete gawped. “It was just bad luck, Lars, you know that.”

“Hmmph.” Lars had retreated to his cabin, back to working on his survival plans.

Links to Purchase eBook version – Click links for book samples, reviews and to purchase
Is your book in Kindle Unlimited? No

Buy this eBook on Smashwords