You are here: Home / Bargain Books Under $3 / Tears of Chios: A Novel (Merchant Tides Series Book 1) by K. Pearson Bradley 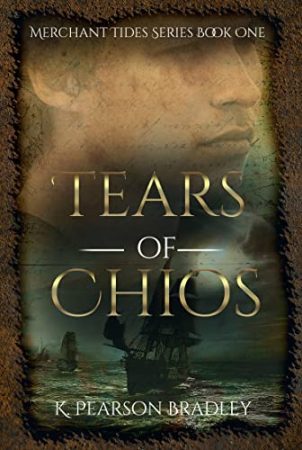 In 1759 on the Greek island of Chios, under the cruel dictates of the Ottoman Empire, Sebastian Krizomatis struggles to find his place amidst the conflict of two competing family legacies.

Sebastian is bound to the land through his mother’s heritage (cultivating the famed Tears of Chios from the skinos trees) but he dreams of following his father, descended from the ancient mariners of Greece, to become a shipbuilder for Sultan Mustafa III’s merchant fleet.

As Greek Christian slaves, Sebastian and the other villagers of Sessera face daily perils on the only island in the world where the valuable mastic tears weep from the gnarled tree branches and are carried by ships for trade across the globe. Pirates, raiders, and thieves will stop at nothing to get their hands on the magical Tears of Chios, and the villagers live in constant fear of danger from invaders. When the sultan’s ruthless cousin, Ahmed, attacks the Krizomatis family without warning, however, a new danger is introduced – one that could change Sebastian’s future and his family forever.