You are here: Home / Buyer's Guides / So Much More by Taryn Plendl 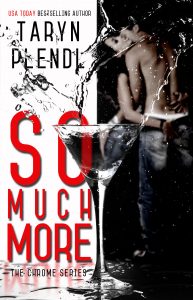 So Much More by Taryn Plendl

Avery Moore writes about romance, but she sure as hell doesn’t live it. Blake Patterson has no trouble getting women. In fact, as the owner of a popular club, women are practically throwing themselves at him.

They couldn’t be further from each other’s type, but when a solid friendship is formed, little by little the lines become blurred.

In this struggle between friendship and love, the desire between them becomes too much to resist.

What happens when your friend suddenly becomes So Much More?

What Inspired You to Write Your Book?
The quirky main character was someone that I really wanted to give life to through my words. She is not your typical female character, and this group of friends became like family to me as I wrote their story.

How Did You Come up With Your Characters?
I always seem to write characters that I would like to hang out with in real life. This group was no different. I would love just one night out with them!

Book Sample
“We’re riding bikes?” I asked Morgan, looking around the room. There were only a handful of people adjusting their chosen bikes with towels laid over their shoulders. Did I need a towel? Letting out a small breath, I relaxed a bit. It was nice and quiet in here, only the occasional noise filtering in from beyond the door whenever it opened. I supposed I could be happy doing this, away from the mating rituals of the main gym.
“Let’s get up front.” Morgan didn’t wait for my reply, and I had a feeling it would just be easier to go with it, so I silently followed. Riding bikes was something I used to do all the time when I was little. I could get on board with this. At least with these bikes I wasn’t going to wreck.
Morgan had me stand next to the bike seat and adjusted it to the proper height. Hopping on the bike, I placed my feet in the pedal holders, pedaling, just to try it out. This wasn’t bad, I could do this, I encouraged myself as I pedaled slowly, watching as the room filled up. People of all types came in. Some looked like stuffy businessmen who shoved themselves into name-brand workout clothing in hopes of maintaining their middle-age spread, and then, of course, there were the sports-bra bimbos with their barely-there spandex shorts. And then there was me in my yoga pants—I had actually never even been to yoga—and an oversized t-shirt.
About five minutes into my leisurely ride, a small blonde woman with a cute pixie cut came in and started adjusting the bike at the front of the room. She seemed sweet as she smiled at the class before messing with the stereo, hooking it to her iPod. I felt myself relax even more. “Is everyone set with their bikes?” she asked the class as she climbed up on her own bike in front of them. I nodded along with everyone else.
With no protests, she nodded back and pressed play. She began to pedal, so in turn, we all did, too. Glancing over at Morgan, I grinned as she winked me. The music began to play some sort of piano chords, and I had a sudden vision of a leisurely ride through the mountains, the cool breeze flowing through my hair as I climbed higher toward the fluffy clouds. It was calming and comfortable, and unfortunately very short-lived as my world came to a screeching halt. The soft piano music I had briefly enjoyed morphed into a bass beat that had my insides bouncing. The sudden change sent up red flags, but it was too late. I was stuck.
Suddenly our little pixie friend transformed into a growling, fierce woman as she screamed, “Let’s go!” She pedaled faster as the rest of the class followed as if all of this was completely normal, and maybe it was, except nobody bothered to clue me in on the little secret. I looked around to see if anyone else was startled by the change in the atmosphere, but no one seemed out of sorts. Just me, and I knew that if I had been closer to the door, I would have jumped off this bike and made a run for it, but my best friend, who, by the way, was grinning as she pedaled fiercely, chose the two bikes farthest from the door … and in the front row.
“Up!” the pixie yelled as everyone stood up on the pedals without even slowing down, pedaling like someone was chasing us. I was tempted to look back and see if someone was, in fact, back there.
“Down!” We all sat and continued pedaling like mad. I could feel the burn in my legs, but continued to pedal anyway.
“Up!” she screamed again. I was getting whiplash with her changing commands, and I couldn’t be certain, but I was pretty sure the instructor’s eyes glowed red as she grinned at me. I wanted to look away, but I refused to show her fear, so I just pedaled like my life depended on it. It felt like I was in that movie with Sandra Bullock where she was on the bus and couldn’t slow down or it would blow up. I was pretty sure something like that would happen to my bike if I stopped, so all I could do was pedal and plan the slow torturous death of my best friend for putting me in this Godforsaken situation in the first place.
The loud song moved into another and then another after that before the bike Nazi finally slowed down to a relatively normal rate. Gasping for breath, I held on for dear life, sure I was being suffocated by the tourniquet bra that was thankfully still holding my girls in place. The ponytail that had been neatly pulled back before we started, now sat off to the side, clinging to my shoulder like a saturated mop. Sweat was running in my eyes, and I wanted to call everyone who ever said sweating was a sign that you had a good workout a big fat liar. I was pretty sure this sweat was my body crying out due to the cruelty it just endured at the hands of the deceitful pixie. Now I understood why everyone had a fucking towel!