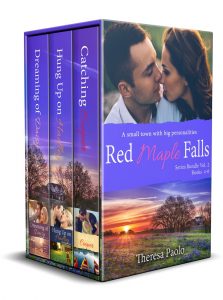 Love blooms in the New Hampshire town of Red Maple Falls in this newest collection of utterly romantic small-town love stories! Join the rest of the Hayes siblings as they each find love in the most unexpected ways.

What Inspired You to Write Your Book?
I love to read family sagas set in small towns. I wanted to create a place where I would love to live with people I'd want to be friends with.

How Did You Come up With Your Characters?
All my characters have a little of me sprinkled in them as well as people who I know and who I have met through my life. In this series an older couple is based on my grandparents and is my way of paying homage to them.

Links to Purchase eBook version – Click links for book samples, reviews and to purchase
Is your book in Kindle Unlimited? No

For joining the author’s email/newsletter list you will get:
Free Book