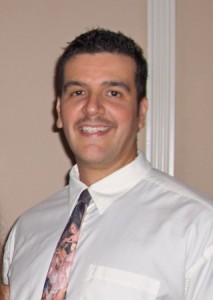 Author Bio:
Hugo Valentin Negron is an avid fan of myths, legends, and folktales. He grew up in Illinois where he still resides with his wife and son. His background includes an M.A. in clinical psychology from Roosevelt University as well as an M.A. in industrial/organizational psychology from the Chicago School of Professional Psychology.

He enjoys reading, biking, and walking winding trails through darksome forests, searching out the mystical beings that reside therein.

What inspires you to write?
My tales are wrapped up in a fantasy world with all sorts of magical creatures and places, but when you take all of that away, you have an ongoing story about growth, about learning life isn’t the way you initially thought it would be, that sometimes good can be evil and evil can be good, and that differences in others should be celebrated and valued, not feared or scorned. If there is a message that has inspired me and that I hope inspires my readers to pick up on, it’s that…

Tell us about your writing process.
I had a general idea of what would happen to the main character Qualtan from start to finish, but it didn’t really strike a chord in me until I related it to the milestones in life everyone usually touches upon – for Qualtan it was his hopes in becoming a knight, his fear of not being good enough when he became a knight, and then once he felt he had reached that pinnacle, to attempt to surpass his role, to become more than what he thought he was. For most other folks it’s going through school, hoping to get that good job in your chosen career, hoping you can succeed at it, and eventually, once you do, wondering what comes next. That last stage usually ruffles a lot of feathers and can become a crossroads of sorts that takes a lot of courage with a greater chance of failure to pursue. Those milestones have always felt important to me and that translated into the life of the character.

Outside of Qualtan’s motivation, there were tons of ideas I had written out but later decided not to pursue, and stories I once liked, but upon re-reading them felt they just didn’t make much sense. I basically did a self-inventory of my own ideas, and began polishing out the gems that still intrigued me. I pretty much visualize the scenes, the environment as if it was a movie, and write down a vague outline on what main points need to be hit and build the details from there – I usually follow that same approach for all the books I write – big summary, broken down to smaller sub-points and then figuring out how to flesh out each.

For Fiction Writers: Do you listen (or talk to) to your characters?
I definitely listen. For example, there is Jesepha the female knight who played a prominent role in Books Two and Three and is briefly mentioned in Book Four and the upcoming Book Five. At first I hadn’t thought of adding a female knight, but after reading through my outline for Book Two I realized it would be fun to add a bit more diversity. So a certain male knight who was really nothing more than a background character with little of value became a female knight, and suddenly there was this great interaction with the mentor of that knight, and more involvement in the main storyline. Soon, Jesepha became this amazing supporting character that got to shine on her own, and by “listening” to her, she took the stories into places I hadn’t thought of.

Who are your favorite authors?
It’s funny as you would expect since I write fantasy for my favorite author to be a fantasy writer. Actually, it’s a Gothic horror/weird fiction writer – H.P. Lovecraft. Not very successful during his lifetime, but after his death appreciation for his work exploded to where now Lovecraft is considered one of the most influential fiction writers of the 20th century, ranked up there with Poe. His mastery was mood and setting – the details he put into his work made everything seem so real. If you read some of his tales, like The Dunwich Horror, The Shadow Over Innsmouth, The Case of Charles Dexter Ward, The Call of Cthulhu, The Whisperer in Darkness, The Shadow Out of Time, and At The Mountains of Madness, you will be swept away into his macabre vision of an uncaring, cold universe ruled by godlike aliens who care little for those that worship them, usually bringing death or insanity to believers and non-believers alike. The scientific data, the archeological history, the detail of architecture, brings Lovecraft’s stories to a vivid life few authors can match. When there’s a dark and gloomy night, you have to pick up one of his works and see for yourself what might come slithering around your bedroom once the lights go out…

How did you decide how to publish your books?
Why self-publish? The opportunity for control – I’m quite the control freak and feeling that I had full ownership over what I had created was important to me. There are, of course, challenges to that – marketing, product visibility, branding, which I have to personally carry, and which are impacted by time, and of course, budget, but so far I’ve been pleased with the results.

What do you think about the future of book publishing?
There are two areas to look at – ebooks vs. paper, and publishing vs. self-publishing – I think like any media, there are pros and cons to each. Personally I prefer reading paper books – I just like having something that is tactile and tangible in my hands, the smell of the pages, and the feel of the book. I just can’t curl up at night in bed with a hot laptop or reader – probably because I’m looking into a computer all day long at work and prefer not to when I’m relaxing at home. Conversely, I have friends/relatives that prefer ebooks because they can have a library of books saved on their readers without needing a ton of shelf space, it travels with them, and it’s convenient to pull up when in a busy line, train ride, or at lunch.

Self-publishing has opened the doors to a lot of great talent and creativity, but also by opening those doors you get a lot of unfiltered material. If a reader comes across a self-published work that is subpar or unprofessionally done/presented, that may color them to assume all self-published works are inferior. The onus on the self-published author is to really put a polished effort out there and to ensure it’s done right. Publishers will always be around, but I think the arena is going to be vastly different as time goes by with a greater variety of books and a greater influx of unknown authors that should be (and will be) known.

Do I think one will replace the other? I’m not sure – I think there will always be an interest/need in both – although one may dominate based on user preference. For now at least, I can say I sell quite a few paperback books at conventions and the like, just as much as I sell ebooks.

What genres do you write?
fantasy, epic fantasy, action and adventure