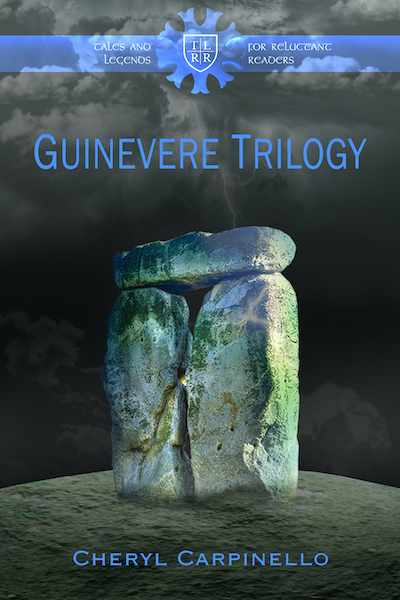 GUINEVERE: ON THE EVE OF LEGEND
Princess Guinevere dreaded her upcoming thirteenth birthday. It signaled the beginning of her official role as the Lady of her father’s castle. No more adventures in the forest with Cedwyn. No more explorations outside the castle walls. No more excitement. No more danger. No more fun. Cedwyn—her companion for as long as she remembered—viewed her circumstances differently. A Medieval coming-of-age story relevant today.

GUINEVERE: AT THE DAWN OF LEGEND
Ancient Stones. Mystical Stones. Autumnal Equinox. Down upon a wide plain the yellow orb shines strong. Racing side by side, the two laughingly ride. A mist descends. The laughing stops. A dangerous Medieval tale of two friends. Of a loyalty not often seen.

GUINEVERE: THE LEGEND
Fiercely loyal, Cedwyn always rushes to Guinevere’s defense. Stubborn to a fault. Always there for her. A future Knight? His one and only hope. A hero? Not what Cedwyn strove for, but it sought him.
Guinevere rarely thinks with her head. Just the opposite. Thinking with one’s heart: a recipe for trouble. And trouble finds Guinevere, all too often. Stubborn, she refuses to abandon those depending upon her. Even when ordered by her father, the king.
And so these two—both on the edge of Legend—barrel forth in this deadly dangerous and riveting Arthurian adventure.

What Inspired You to Write Your Book?
I taught the King Arthur Legend for over 20 years at the high school level. My initial inspiration came when year after year, my students would tell me the same things about Guinevere: she married Arthur, she cheated on him, and she was the downfall of Camelot. And so, during my last year of teaching, I started to formulate an idea for a book about Guinevere, but not the married, cheating Guinevere of my students. I decided that there had to be more to Guinevere than that. And that was the Guinevere I wanted to write about. That was the Guinevere that I wanted to introduce to young readers. A girl like any other young girl. One who thinks more with her heart than with her head.

How Did You Come up With Your Characters?
My characters come from Arthurian Legend. King Arthur, King Leodegrance, Guinevere, and Merlyn are actual people from the stories. I added additional characters like Guinevere's best friend Cedwyn, Cedwyn's mother Brynwyn, and several other characters one would find with King Arthur and in a medieval castle. My biggest challenge here was researching Welsh names for the blacksmith, the teacher, and the ones who worked in various positions in the castle.

Book Sample
Guinevere: On the Eve of Legend, book 1

Guinevere stared into the shadows along the edge of the forest. She could hear Cedwyn shifting from foot to foot beside her, unable to stand still. She sighed, the bow of sturdy pine in her hand growing heavier like her heart. Her thirteenth Birth Day was in a few days, but she wasn’t excited. Birth Days were supposed to be fun, but not this year. Not for her, not for a princess.

She frowned as Cedwyn adjusted the leather quiver of arrows on his back again. Sometimes, like today, her patience with the nine-year-old was short.

She stamped her foot on the ground, annoyed at being interrupted. “Cedwyn,” she snapped. “What is so important that you can’t be quiet?”

“I’m hungry, and the bottoms of my trousers are damp. Can’t we go back to the castle?” His voice betrayed his hurt at her tone.

Guinevere knew her anger wasn’t with Cedwyn. It wasn’t his fault. The bottom of her green ankle-length tunic, also damp with the morning dew, was starting to make her ankles itch. Her stomach chose that moment to begin grumbling. It started as a low vibration but grew louder as if it hadn’t been fed in days.

Cedwyn heard it and started giggling. He tried to smother the sound by covering his mouth, but he was too late.

Trying to keep from laughing also, Guinevere shook her head. “How are we ever going to shoot a rabbit with all this noise?” She tousled his blond hair to let him know that she was not serious. “Let’s try for just ten minutes longer. Then if we find nothing, we’ll go back. Is that all right?”

Cedwyn nodded, not wanting to make any further noise.

Her eyes wandered across the blue sky. The English summer sun had barely reached above the far hills when they had first arrived at the forest. Now, it was well on its way in its climb toward the dinner hour, and they hadn’t even had a proper breakfast yet. Cedwyn’s mother was sure to be upset that they had been gone so long.

“Come on,” he whispered. “The only creatures we’ve seen moving have been badgers and Cornish hens. We could of had five bloody hens by now.”

“You better not let your mother hear you use that word. Anyway, I told you, it’s good luck to bag a rabbit on the eve of your thirteenth Birth Day,” Guinevere said.

Cedwyn studied her face, unsure if she was telling the truth or not. Then his blue eyes widened, and he grabbed her arm as she turned to continue hunting. “Wait a minute! You promised to help me bag a rabbit on the eve of my tenth Birth Day. You said that was lucky!”

Cedwyn eyed her suspiciously. “But I thought that the eve was the night before. Your Birth Day isn’t until the day after tomorrow.”

“That’s true, but the eve of something can also be anytime close to the day.”

“Of course I am! Otherwise, what would happen if the day before I didn’t get a rabbit? This way there are more chances to get one. Now, let’s go. I’m sure I saw the grass moving up ahead, and I don’t think it was the wind.” She didn’t mention to him that she needed lots of luck.

Cedwyn obediently followed her, mumbling to himself.

“We’re still running out of time.”

They hadn’t gone far when he thought of something else. “Guin’ver?”

She turned, her long brown braid whipping around.

“Shh! You will scare the rabbits away!”

“But you also promised to teach me how to hunt with a bow and arrow once you are thirteen.”

“Yes, but if you don’t stop your chatter, I won’t. Do you understand?”

Cedwyn nodded. A slight upturning of his mouth betrayed his satisfaction at her promise.

He followed, a smile highlighting his chubby cheeks. He then smacked into Guinevere who had abruptly stopped.

A hand clamped down over his mouth followed by an angry “Shh!”

Cedwyn moved quietly up to her side, his nine-year-old frame coming up to her shoulders. When she looked him, her brown eyes sparkled with excitement in the midmorning light. Her lips formed the word “Look.” His blue eyes followed her out-stretched arm.

There, just beneath the pine trees where the wild grasses grew– movement. He stared at the spot. Then the tall green stalks bent again, betraying the presence of something beneath.

“How can you tell if it’s really a rabbit?” he whispered.

“See how the stalks move forward a bit and then part?” Cedwyn nodded.

“Well, the forward movement of the stalks is the rabbit testing out the goodness of the food. And then where the grasses part—that is—when the rabbit stops and starts feeding,” Guinevere said, her pride in her knowledge showing. “Hand me an arrow.” She held out her hand as Cedwyn pulled an arrow from the small leather quiver on his back.

Very carefully, her heart pounding, Guinevere nocked the arrow and steadily drew the bowstring back. Taking a deep breath to steady her arms and calm her heart, she let the arrow loose. She watched the spin of the feathers as the arrow sped to its target like a hawk diving after its prey.

Suddenly a horrendous cry filled the air. Guinevere and Cedwyn jumped into each other’s arms. They crouched on the ground and covered their ears as the shrill cry continued to make their ears ring.

“Wh…what is that?” Cedwyn whispered.

Guinevere shook her head in reply.

And then, a different sound—of something crashing through the grasses and scrub thickets. They inched their way up to peek above the grass. There—crashing and charging around the thickets—the biggest wild boar they’d ever seen.

Cedwyn looked at Guinevere. “Ain’t that your arrow sticking in its side?”

She nodded slowly, in shock that she’d hit anything. For a few moments, they watched as the boar ran first in one direction and then another in what appeared to be a crazed pattern. But Guinevere recognized the pattern: the wounded boar was searching for its hunters.

“Why?” Then he had his answer. The boar roared in anger. The ground trembled under their feet as the boar spotted them and barreled straight for them. It had found the culprits responsible for the arrow in its side.

Cedwyn needed no further urging. He took off with Guinevere close behind him. The thunderous crashing of the boar through the grasses and scrub brush vibrated through every part of their bodies.