You are here: Home / Bargain Books Under $3 / Featured Book: Shadebringer: Book One: The Land of Irgendwo by Grayson W Hooper 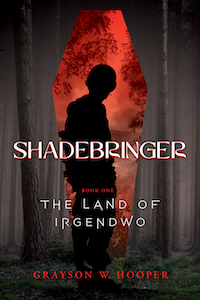 About Featured Book: Shadebringer: Book One: The Land of Irgendwo by Grayson W Hooper

In the beginning, there was only Daedrina, and she dwelled in darkness.

Clyde Robbins joins the US Army in 1969 to find purpose in life but quickly learns that in war, life is one’s only purpose. But Clyde dies like countless others before him in a rain of fire and lead, and when he thinks it’s all over—and the curtain draws shut on his final act—he awakens in the strange land of Irgendwo. He quickly meets a gruff German Luftwaffe pilot from the Second World War and a pudgy British doughboy from the First. Together, they take Clyde into the heart of an ancient city ruled by a shadowy cult to settle him into his rigorous new existence. But the cult’s sages discover Clyde is a Shadebringer, a prophesied warrior capable of challenging their power, and the ensuing struggles bring Clyde to the realization that his afterlife is just another war . . . one he cannot lose.

In this thrilling first volume of the Shadebringer series, author Grayson W. Hooper introduces a vivid world of Cronenberg monstrosities, magic, soul-eating children, and the reanimated dead. The Land of Irgendwo is a fast-paced adventure flecked with savage humor, emotion, and true purpose: friends worth fighting for.