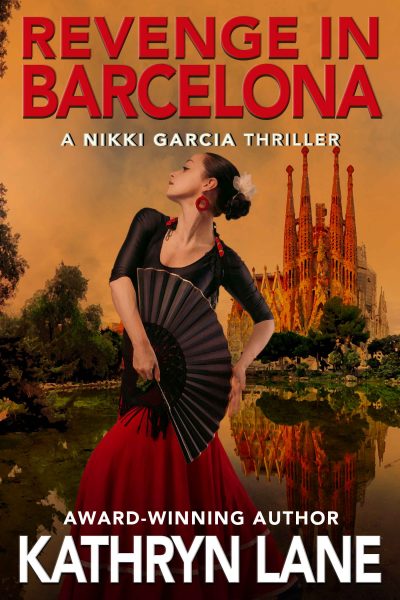 About Featured Book: Revenge in Barcelona by Kathryn Lane

Grab this book at bargain price of $1.99 on August 7th and 8th 2020.
Nikki Garcia, former international fraud auditor turned private investigator, escapes to Spain with her fiancé after a death threat on her last assignment in Mexico. She puts the past behind her and turns the trip to Barcelona into her destination wedding. A week later, Nikki and the love of her life, Eduardo, find themselves caught up in a terrorist attack at one of the city’s major tourist attractions. As events unravel, Nikki discovers she is being stalked. Worse, she may have been the target of the deadly bombing.
In a foreign country, where the authorities are investigating a terrorist attack, they ignore that Nikki, an American woman, might have been the intended target. The newlyweds must navigate behind the legal and law enforcement systems to uncover the sinister person who seeks revenge against Nikki. Private investigators often encounter threats, but why would someone follow her to Spain?

To find out who has plotted against her, they consider international connections to people she encountered her past investigations in Latin America. Weaving their way through Barcelona in an attempt to get facts, Nikki and Eduardo further endanger their lives upon discovering a series of suspects, from flamenco dancers to foreign nationals. Will they be able to outsmart the would-be assassin’s attempts on Nikki’s life?