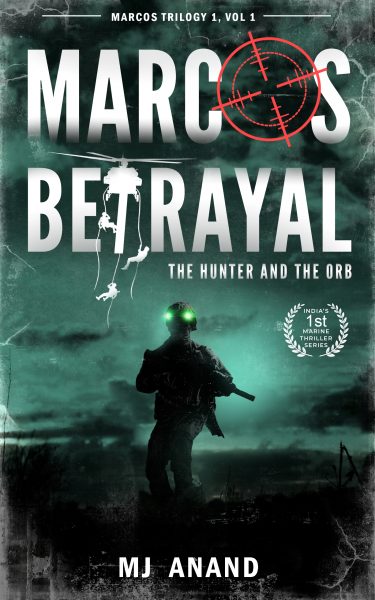 About Featured Book: Marcos Betrayal : The Hunter and The Orb by MJ Anand

The Himalayas have saved India from many invasions but when a veteran Boarder Intelligence officer dies a cold death in the deep mountains, the intelligence establishment is sent into a tizzy. The information he extracted before dying confirms their worst nightmares. Little do they know that it’s just the beginning of a covert invasion that would change the Asian Intelligence order forever.

At a time when the Indians are trying to recover from the deadly Mumbai attacks, a more sinister plan is put into wheels. The Indians call upon their best, and so, Abhimanyu finds himself pulled out of his honeymoon. His personal life has been put on hold, once again.

From the high Himalayan mountain passes to the endless horizons of Thar, the leads take him to a point of no return. He wanted to retire soon but the call of duty stretches him once again. While the enemy remains elusive, the possibility of a mole troubles him even more. Will he lose himself before he finds the truth or, let the truth find him and kill him.