You are here: Home / Buyer's Guides / A Poor Man’s Supper by Jim Gulledge 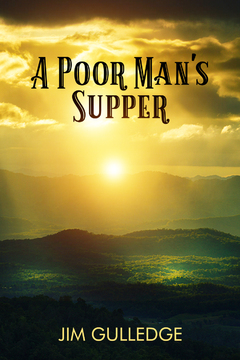 In the North Carolina mountains two people, destined to love each other, are doomed to be apart.

Vancie Keller is trying to survive on her mother’s failing farm when her life is forever altered by the arrival of two men, Josiah Buckland and Jagger Hill.

One, she will love, the other she will marry. She has a secret neither of them know.

Orphaned as a teen, Josiah Buckland came down from the rugged mountains of North Carolina to try to find work and possibly a home. He didn’t expect to find the love of his life.

Jagger Hill has secrets of his own. When he comes to town and starts to rebuild, nobody knows him for who he really is, but people will soon learn. Some things cannot be kept hidden forever…

A powerful, heart-breaking tale of the tremendous consequences of our choices and actions, sprinkled with revelry in the natural world, faith, song and myth.

What Inspired You to Write Your Book?
I was attending the funeral of my aunt in South Carolina on a hot July day. While wiping sweat from my brow, a voice in my head said, "This is where the story begins." The book did not start on that particular day, but the compulsion to start did. Words began to appear on the page a few months later while I was on a trip to the North Carolina mountains.

How Did You Come up With Your Characters?
Some of my characters are based on real people from my life, especially my father and paternal grandmother. The main character is named for my grandmother. The villain strangely is based on a former minister. Others are amalgams of people I have known. Some just appeared.

A red-tailed hawk rose on the currents of the afternoon thermals, gliding round and around the crown of the weather-beaten pine before resting upon an outstretched branch. From his perch, the bird looked out upon the vista that stretched before his keen eyes. Below him a rustle in the grass turned his attention from the heavens to the earth. A small cottontail emerged from its hiding and nibbled at wildflowers on the edge of the cliff. Before the hawk could muster its instincts to respond, another motion entered the scene just below the rabbit. The head of an Eastern diamondback rattlesnake emerged over the rim of the ravine and flattened out as it wound its way closer to its prey. The rabbit saw nothing and knew nothing until a flash, the sensation of warm fluid oozing into its cranium, and the stiffening of limbs and darkening of senses. The snake coiled in bliss around the twitching final pulsations of the ball of fur and fluids.
Its revelry, however, was short-lived. In another flash, a convulsion of pain interrupted the snake’s pleasures as piercing talons penetrated its flesh and lifted it skyward. Soon, the hawk sat upon his perch once again and tore the eyes from the stilled serpent. Had the bird cared to notice, at that moment a man descended from the peaks above and another wound his way up the rugged escarpment below. The blood lettings of men were about to play out again beneath the watchful eyes of the bird, but hawks are creatures of the air and take no notice of the affairs of men. That he would leave to the one who made them. Slowly, the raptor lifted and again rode the warm afternoon breezes, oblivious to all hungers but its own.