You are here: Home / Buyer's Guides / The Cronian Incident by Matthew Williams 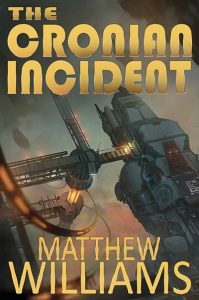 The Cronian Incident by Matthew Williams

Disgraced investigator, Jeremiah Ward, once worked the Martian beat, now he’s serving out his sentence in a mining colony on Mercury. His golden opportunity arises when a member of a powerful faction on Titan vanishes and Ward is promised, in exchange for investigating this man’s disappearance, a clean slate and a second chance.

Unwittingly, Ward becomes embroiled in a conspiracy, centuries in the making, and begins to realise his one shot at redemption may cost him his life.

From terraforming to colonisation, to the Technological Singularity and the future of space exploration; The Cronian Incident is a must read for fans of thrilling mystery science fiction.

What Inspired You to Write Your Book?
A few things inspired this work, actually. For one, I've been a writer for Universe Today for many years. Researching and writing about the planets of the Solar System, and being able to speak to experts in the field about current and future missions, has always been inspiring. Eventually, I set out to write about how humans might one-day live on all the planets, moons and large asteroids out there.

At the same time, I've been researching the subjects of climate change and technological change for years, since these will be the predominant forces shaping our future. Specifically, I wanted to know how these forces would drive human exploration of the Solar System and its eventual colonization. Between these two sources of inspiration, I found The Cronian Incident!

How Did You Come up With Your Characters?
Jeremiah Ward had a number of influences. On the one hand, I wanted a deeply-flawed character, a sort of anti-hero for the modern age. On the other hand, he also needed to be skilled and competent as an investigator. In the end, I decided that he would be good at his job, but suffer from one fatal law. In his case, it was drug addication.

Janis Amaru, who is central to the story was largely inspired by my wife. I have always had a thing for strong, smart, dedicated women. And in the end, I found myself drawing on my many years of being married to one to inspire Amaru's character. The other characters, such as Guernsey, Pinter, Adler and Emile, were all just the products of my twisted imagination!