You are here: Home / Bargain Books Under $3 / Season, Unforgettable by Keta Diablo 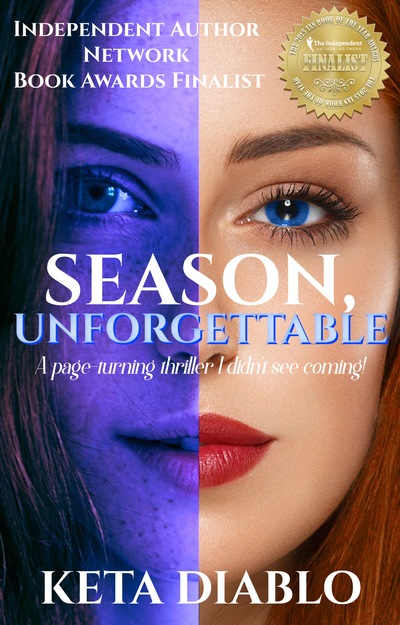 Would you forsake your mother to save the woman you loved?

Season Scrimshaw isn’t selling the land her parents left her when they died, not even to the gorgeous Rann Brogan who saved her life in the forest. Especially not after she finds out he was in the woods surveying her property.

Rann’s mother, Charlotte, owns a large land development company. She wants Season’s property to put up a strip of luxurious, lakefront condos and Charlotte always gets what she wants. She sends Rann on a mission to seal the deal. To say Rann and his mother have had a normal mother/son relationship would be a stretch…a big stretch, but he’s always done her bidding.

This time it’s different. Rann hasn’t been able to get the beautiful Season out of his mind. While on his mission to secure the property, he realizes how much Season loves the land, and…he realizes somewhere along the line, Season has stolen his heart.

He discovers his mother will go to any length to get what she wants…including murder. Lives spiral out of control, secrets and lies take center stage. Rann is forced to choose between his mother and the woman he loves.

And he’s forced to become as dangerous and as lethal as Charlotte.

What Inspired You to Write Your Book?
Season, Unforgettable started out as a boy-meets-girl romance and then about one-third of the way through my muse took a drastic turn, and it became a thriller/suspense (as so many readers told me). I thought I had a pretty good standard romance going and then something just took over. It's a very unusual plot and one that I haven't read about too often, if at all. You'll have to read the book to find out how it took that right-hand turn. lol

How Did You Come up With Your Characters?
I knew I would write a story about an independent young woman who loved nature and everything on God's peachy earth. The young man would be handsome, but more importantly, kind and patient. Rann was that and more. As one reviewer wrote: "I wish Rann would talk to me like he talks to Season." You can't give him a better compliment than that.

Book Sample
Setup: Someone wants Season dead.
Excerpt:
Looking at the road Season now traveled, a sense of the unfamiliar hit her. Holy crap! This isn’t right. Don’t panic, take a deep breath. You’re not on Mars, at least I don’t think they have red barns and silos on Mars.
Cows grazed in the pastures, a black crow or two crossed the sky. She realized she must have made a wrong turn leaving the 7-Eleven. Was she supposed to go right to get back onto the Interstate or left? She’d have to backtrack and that shouldn’t be a problem since she couldn’t have traveled more than four miles. The gravel road didn’t want to cooperate with her plan. The straight path she’d been on had now turned into a bend, an elongated curve with no end in sight. Still no reason to panic. Hey, if it is a never-ending bend I’ll end up back at the little store.

About to reach for her cell in the passenger seat, she checked her rear view mirror first. A cloud of dust had formed behind her car, a whirling dervish that screeched fast and furious. If it didn’t slow down, and there wasn’t a lane on either side to pass her, how would it navigate around her?

Kaboom! The car slammed into her tailgate. Her neck whipped forward and then back again. Full-blown terror snaked down her spine. The car hadn’t stopped; it was still swerving and swaying behind her. She didn’t dare pull over. This was no accident but an intentional act. She wracked her brain. Had she pulled out in front of someone unknowingly? What about the clerk at the store? God, she couldn’t even remember what he looked like. Had he followed her?

Kaboom! A scream seized her throat. The Denali veered to the right. Tires squealed, hers or the other vehicle’s she didn’t know. Curve eternal still loomed ahead with no driveways or turnarounds in sight. Frantic now, she searched the seat for her phone. Her hand met flat leather. It must have fallen during the last ram.
With one eye on the gravel road, one in the rearview mirror, a beam of sunlight illuminated the maniac’s car. Spiders crawled over her skin. Silver SUV? No, it can’t be! An engine roared and then brakes squealed. She clung to the steering wheel and prayed.

Bam! The Denali screamed its outrage or was it the sound of broken glass? A steep bank ahead flashed in her line of vision. Dear God, help me! Oh no, oh, no. Like a spinning top, the Denali flipped, ass over tea kettle. Immense pain shot through her body. Something warm and sticky ran down her face. Why hadn’t the air bag deployed? Her vision faded in and out, and she couldn’t form a rational thought. Oh, Pearl, we’re dying. Duna! Oh, my God, Duna, I-I shouldn’t have listened to you this time, should have followed my aura meter.

Complete, utter darkness closed in on her.