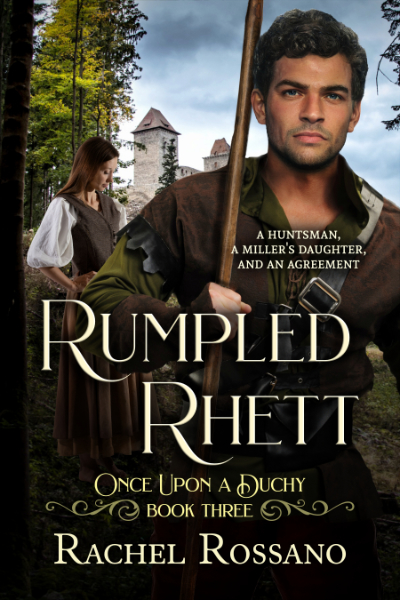 Rhett is a Huntsman, skilled, secretive, and mysterious. A wanted man, he spends his life on the move. His sole retreat is the outskirts of an isolated village in the northern reaches of the duchies. Then one fall, he arrives to find his hovel burned to the ground and the village reeve offering a new arrangement.

Catherine knows her father, the village miller, only cares about what she can bring him. The latest scheme of marrying her to the Huntsman is not the miller’s first attempt to sell her. Cat’s dread wanes when she meets the Huntsman. There is something honorable about him, and he treats her with respect, unlike her father or brother. Perhaps she can escape her father’s influence forever.

Despite his suspicions, Rhett agrees to the deal and frees Cat from her father’s tyranny, at least for a time. But can he protect her when enemies from his past catch up to him?

What Inspired You to Write Your Book?
Rumpelstiltskin has always been an interesting fairytale for me, so the opportunity to turn it on its head intrigued me. Making Rumple a hero instead of a villain ended up being a fun twist. The heroine from the original fairytale struck me as a long-suffering practical woman in the way she puts up with her father's tall tales and manipulations.

How Did You Come up With Your Characters?
Rhett was inspired by Rumpelstiltskin as well as the Huntsmen one encounters in many fairytales like Red Riding Hood and Snow White. A man of mystery and danger, he seemed to have great potential as a romantic hero.

Book Sample
“Ah, the nomad returns!” Duggan raised a half-filled beer mug to take a swig. A rotund man, the reeve’s belly sagged over his belt as he got to his feet.

The few other patrons warily quaffed the last of their drinks and made their way to the door. All of them avoided even glancing my way. I didn’t care. I had business with the man before me, not them.

“My house burned down.” Crossing my arms over my chest, I narrowed my gaze on Duggan’s flushed features.

“It went up in flames one night.” Duggan huffed out a dramatic sigh before draining the last of his beer. “We tried to stop the blaze, but—” He shrugged one of his plump shoulders beneath his fur-lined robe.

“We had an agreement. I protect the village, and in exchange, I get land and its tending while I am away.” I let the facts and my glowering silence sink through his thick skull.

He owed me. The village owed me. My reputation as the Huntsman kept most thieves and bandits from targeting the community. Only the foolish and foolhardy occasionally attempted to harass me, but I swiftly enlightened them.

In return, I had requested only two things. I wished to live at peace for a few months every winter, and I needed someone to guard my shelter when I was gone the rest of the year.

“We tried to save it,” he protested mildly.

“And didn’t bother to rebuild it,” I pointed out. Frost-tipped grass had peeked through the ash heaps. Months had passed since the fire by the looks of things.

“We considered it.” His voice was even and calm, but he continued to avoid looking at me. “But we needed the wood to expand the mill and—”

“We had none left to rebuild your house as well. So, we decided to work out a better situation.”

I let my silence speak for me. I had been content with my situation. It suited me well.

True, I hadn’t been particularly fond of the hovel I had been allotted, but it had been enough. I valued its attributes: warmth, isolation on the edge of the village, and comfort enough for my winterly retreat from my reputation.

“Come, let me show you.” He motioned toward the square outside.

“No.” He had planned this for all I knew, and the village’s enforcers awaited me beyond the expensive new tavern windows. “First, you explain.”

Duggan pursed his mouth like a spoiled child who had just been reprimanded by his mother.

I cleared my throat.

“So, we took it upon ourselves to—”

“The point?” My voice lowered and warned of my waning patience.

“We have chosen to give you land, a house, and a wife.” Duggan turned and banged his mug on the bar top. “Another!” he bellowed.

“A wife?” I stared at him in complete confusion. “How did you come to the conclusion that I needed a wife?”

“A house without a wife is empty.”

Exactly how I like it, I thought. But Duggan continued.

“She can cook for you, clean for you, and fill the house with comforts that make it a home. There is nothing like coming home to a warm meal on the table, hot mulled wine in one’s cup, and the pleasures of a woman’s company to keep one content.”

The image in my head was much less appealing—chatter, demands for expensive accouterments, expectations of me being home on time, and…children. My mind caught on the last thought. I did need children to carry on my family name and the traditions of the huntsman. Distant memories of my mother’s stories impressing upon me the importance of my father’s lineage and the bloodline I carried pressed in on me. Shaking free from their hold, I grimaced. That didn’t mean I had to do it now or even ever.

“Don’t discount it until you have tried it, Huntsman. A woman’s touch is what you need.”

Duggan shouted his approval. “A house, a wife, some land, it is about time you settled down.”

“I have no intention of…”

Duggan was already out the tavern door and yelling to someone across the village square. “Master Billier! The Huntsman has returned. Bring your daughter to the meeting house.”

My lip curled of its own accord. Billier was the town miller, and fat, thanks to his position running the only mill for miles around. That didn’t stop the man from being despicable. I avoided him when I could and wrestled my temper and conscience every time I couldn’t. I wanted nothing to do with any scheme in which he was involved. Last year he had claimed that his daughter could spin straw into gold in an effort to sell her off to a traveling nobleman. I wouldn’t entrust any living thing into his care, not even a cat, and I cherished no love for the furry creatures, thanks to their effect on my eyes and nose.

Duggan beckoned from outside. “Come, Huntsman. Billier fetches his daughter to the meeting house. She’s as fair and biddable a lass as any other.”

A woman was far less deserving of Billier’s care than a cat. I decided to allow the farce to continue a bit longer, the better to understand their intentions. Surreptitiously checking my access to my weapons, I followed the reeve in the direction of the dark meeting hall.

As Duggan rushed about lighting a fire in the hearth and a few of the lanterns against the walls, I staked out the corner farthest from the door. The reeve had only lit the corner nearest the door before it opened to admit the greasy-haired miller and his daughter.

She was small. Petite and barely a handful of feet high, she could fit beneath one of my arms, and I could carry her off without much effort. Not that I would. However, there was a dignity, a solidness to her tiny frame that made her father keep his distance despite his evident eagerness to sell her assets.

“She cooks, cleans, and keeps house well enough for a girl. Has a fair enough figure, so I am told. Come on, girl, show off your wares.” Billier shoved his daughter forward so that she stumbled.

Only a brief glare in her father’s direction betrayed her anger. Still, she obeyed. Back straight and shoulders tight, she walked with confidence despite a slight limp. Perhaps she had an injured hip, knee…no. I watched for a few more steps. Something was wrong with her foot, and walking on it pained her, causing a slight hitch in her breathing. Her betrayal of the weakness was so minute that I had almost missed it.

My attention swung to her father. Had he injured her? It would fit his malicious personality. What he could not bully, he humiliated. One look at his daughter’s tightly wound body, and it was easy to imagine him pressuring her to do something solely for his benefit. But what was he getting out of her marrying me?

“What? If she doesn’t please you—” Billier sputtered.

Billier’s glare at his daughter intensified as the reeve guided him toward the door outside. “You mess this up, girl, and—” Whatever he intended went unsaid as Duggan closed the door behind the two of them with a sharp tug.

The girl relaxed infinitesimally. However, she also eyed me warily and oriented herself to duck behind a table should I become more clearly dangerous.

“What is your name?” I asked. I hadn’t seen her about the village before, but then I rarely spent any time in the village.

“Catherine, but everyone calls me Cat.”

I laughed. It came out as a rusty sound, as though I didn’t do it often, which I didn’t.

“No, but the irony is.” Then I realized by her blank expression that I would need to explain. “Cats make me sick, the four-legged variety that is.”

She didn’t smile. Instead, she simply nodded. “Then it is good I am not that kind of cat.”

Silence descended between us. Faintly through the door behind her, we could hear her father raging. My concern for Cat’s safety grew. I didn’t think Billier was capable of murder, but one never could tell by looking at a person. Also, accidental murders happened, like beating someone to death in a fit of rage.