You are here: Home / Bargain Books Under $3 / Outbreak (The Dark Days Series Book One) by Christopher Cole 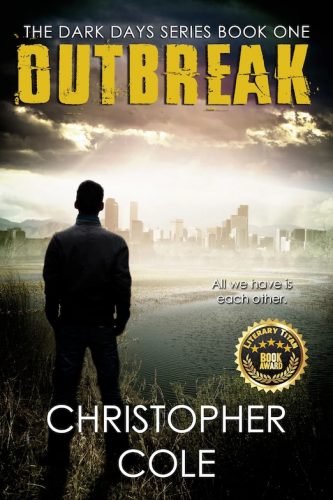 Cities are bombed out ruins and wilderness is humanity’s new home. The undead roam the earth, and the new world order is about the struggle to survive. Sonny Daniels begins an emotional and physical journey of personal survival and protecting those he loves.

While survival is a constant struggle, Sonny’s most desperate fight is the struggle preserve some semblance of a compassionate soul. Sonny and his parents are caught in the zombie outbreak in upstate New York. After the passage of the first year, their base is attacked by bandits and their safety has again been compromised. Fearing for their loved ones, Sonny’s parents send him and his orphaned childhood friends, Ashley and Carrie, to Fort Denver Colorado on a military plane.

When Fort Denver is overrun with zombies, the three are alone in a zombie-infested wasteland without the army’s protection, forced to rely upon one another and a handful of equally desperate survivors they encounter along the journey. Sonny is determined to do whatever it takes to protect Ashley and Carrie while finding a safe place to call home, but survival can force you to make dark decisions.

What Inspired You to Write Your Book?
Neal Shutterman's books Everlost, Everwild, and Everfound were one of the best books I've ever read. They inspired me to write after I started getting ideas in my head. I was pulled into the books and I started daydreaming stories of my own.

How Did You Come up With Your Characters?
It was a mixture of characters I liked in stories and characters I wanted to appear in stories as well. Most of my childhood I didn't like reading books, because most of the books I read had uninteresting characters and I found myself rooting more for the side characters than the main characters. I try to write characters in my book that people can care about or want to care about.