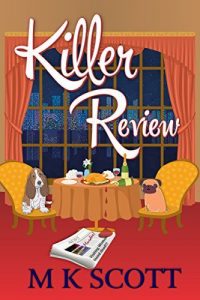 A ruthless food critic’s appearance in Legacy has all the local chefs on edge, not knowing whom she intends to skewer next. Donna and staff turn cartwheels to keep the reviewer happy. Her friend, Janice, who runs The Croaking Frog, begs her to spy on the critic.

A difficult guest has Donna call in the cavalry in the form of her mother. Now, that mom’s foot is in the door, she won’t leave and is determined to help Donna with the inn and her love life. The first thing they need to do is find the missing critic, right after their double date.

Join the characters from The Painted Lady Inn for a hilarious cozy mystery. Recipes are included.

What Inspired You to Write Your Book?
I was inspired by Mary Higgins Clark's book, The Lottery Winner, and chose to write something similar. I combined mystery with my second love, food, for a series of culinary cozy mysteries.

How Did You Come up With Your Characters?
They developed as I considered the town and its residents. Real life people may have influenced me, but none became one particular individual. The exception was Jasper the dog who was modeled on my own dog.

Book Sample
Her eyes closed as she pictured the conclusion of tonight's snooping. Daniel would ask Maria what took her so long. Then, she'd gleefully inform him she'd been part of a deep cover investigation into the missing guest. Never mind, that deep cover meant tell no one. Her brother would raise an eyebrow and mentally blame her for leading his wife down the garden path of possibly criminal activities under the sleuthing heading. No way would he consider Maria came up with the idea.
Good heavens, who would her mother, tell. She might even write about it on her blog, Still Sane after Seventy. Considering some of her recent behavior, that might be debatable, too. This would not turn out well.
"I found a notebook." Maria spoke the words only a decibel below shouting. Donna prayed the guests had their televisions blasting. At least, there was no one on this floor and no reason to creep downstairs since the snack pantries were full.
Her mother gave her as shove as she moved past her. "For Pete's sake, open your eyes and quit that groaning. We're trying to help you."
Help her? She hadn't asked for their assistance. She'd already checked the room-within acceptable housekeeping guidelines. Maria brandished the stenographer's notebook and flipped it open. Her eager expression melted.
"What is it?" What would be anticlimactic after finding a sought after clue. "Recipes?"
"No." Maria motioned Donna closer. "I think this is your area of expertise. It's in code or a foreign language." She held up one finger. "Before you ask, it's not Spanish."
She took the notebook filled with an occasional letter or sign, but it didn't resemble any of the simple numerical codes that obviously hadn't fooled her brother. "I'm no cryptographer."
Her mother plucked the book out of her hand. The woman had the attitude there wasn't an obstacle she couldn't conquer. The sound of pages turning filled the room.
"Seriously, quit pretending to read. If we can't figure it out…"
"Hush." Her mother shook a warning finger that made Donna go silent. Cecilia kept flipping pages and would gasp occasionally, then turn another page. She must be reading because her eyes were going back and forth. Her mother wouldn't welcome another interruption from her, so she elbowed Maria to ask any pertinent questions.
Message taken, she leaned over her mother in-law's shoulder to peer at the notebook. "What language is it?"
Her mother glanced up. "Shorthand. I used to be a secretary before I married. So few people know shorthand anymore that it's become a dead language like Latin." Her brow furrowed as if contemplating something deep. "No, make that Greek since we still use Latin in medicine and in common prefixes and suffixes."
"Mom, what does it say?" If not stopped, Cecilia Tollhouse would launch into an impromptu language lesson.
"Mmm, your guest was a very conflicted woman. It feels wrong telling her innermost secrets."
"Duh, you read them. Maria handled her lingerie. I'm not sure we can get much creepier. Besides, there may be important information inside the notebook relating to her disappearance. . .

For joining the author’s email/newsletter list you will get:
Free chapters