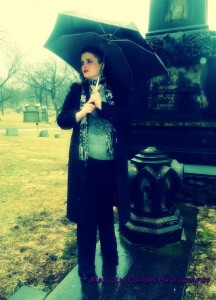 Author Bio:
Tiffany Apan grew up among the thick forests of the Appalachian Mountains in Northeastern Pennsylvania. It was there she began honing artistic abilities and received much of her creative inspiration. A misfit among her peers (she was the only one in her fifth grade writing class obsessed enough with Vikings and Norwegian mythology to write poems about them), Tiffany was highly active in the artistic community in Wilkes-Barre, PA, involving herself in all music, theater, visual arts, and writing. Eventually, she settled quite comfortably into a role as “that artsy kid in black” who sits in a coffee shop, drinking endless amounts of coffee and tea while writing furiously in a journal or sketchpad.

After graduating high school, she left the Northeastern PA ghosts for the Southeastern PA zombies (Pittsburgh). Upon the move, Tiffany became involved with the indie film scene, landing supporting roles in a couple films. This also gave way to the release of her music with partner in crime, Jason English. Since then, she has gone on to act in several films and theater productions with starring and supporting roles, release music to critical acclaim, and receive accolades for her writing and producing.

While Tiffany enjoys the Pittsburgh area, Northeastern Pennsylvania is the place she considers “home”, and frequently travels up there for inspiration. The Appalachian Mountains serve as a backdrop for many of her stories, including The Cemetery by the Lake and The Birthrite Series.

What inspires you to write?
It’s kind of hard to say, because I can receive inspiration at any given time. I could be out jogging and an idea will suddenly strike me. Then I’ll feel compelled to return home and expand upon it.

I will say that the area I grew up in (the Mountaintop/Wilkes-Barre area in Northeastern Pennsylvania) serves as a backdrop for a lot of my stories. Some stories of mine were inspired by dreams I had. In fact, the third short in my Stories from Colony Drive Series (titled The Twisting House) is inspired by a dream I recently had, on top of being inspired by Mark Z. Danielewski’s wonderfully creepy, House of Leaves and Poe’s “Haunted” album.
So to properly answer that question, life in general inspires me to write.

Tell us about your writing process.
I usually begin with a basic idea that I’ll outline, followed by starting to build and develop my characters while doing what research is necessary (especially if I’m writing a period piece). Then, I’ll sit down and do a few outlines and drafts until I have something that I can proudly call a first draft. Sometimes this happens right away, while other times it can take months before I’ll have something remotely coherent. With Descent, the first book in my Birthrite Series, it was a year before I was happy with where the first draft was going.

Of course after the first draft, I’ll usually proofread and hand it over to a beta or two in order to gauge where improvements can be made. Then I revise, revise, revise.

I often blog my progress on new projects and share excerpts from drafts at my official blog, http://tiffanyapanwritingproject.blogspot.com

As a side note, my creativity typically flows best late at night and early in the morning. Lot’s of water and coffee is also a must. I also like to have music while I write.

For Fiction Writers: Do you listen (or talk to) to your characters?
I listen more than I talk when it comes to my characters. It’s often when everything is quiet and still around me that they tell me their stories. They are also quick to let me know if I’m not representing them properly and make continuing with the story quite difficult until I have it right!

How did you decide how to publish your books?
With the projects I’m doing now, I decided to publish independently as I’ve done with my music, simply because I enjoy the creative freedom. I do ask for input from beta readers and such, but in the end the decision of where to take the story is mine. I’m not saying this is the best road for everyone, but it’s what feels right for me.

What do you think about the future of book publishing?
I think we are starting to see alot of independents and small publishers coming to the forefront, and there seems to be more of a demand for such. While there are many great works being released through the major publishers, I think many readers are searching for something that is a little different and outside the norm. Programs like Smashwords, CDBaby, Book Baby, CreateSpace, and the like help in opening up more possibilities for these independent authors and small publishers to bring their works to light without having to go through a middle man.

Bloggers are also becoming the new media, giving us all outlets we otherwise would never have had before. I also try to help out my fellow artists through my own blog and this summer, I’m relaunching my newly improved webcast.