You are here: Home / Fiction / Interview with Author – Russ Scalzo 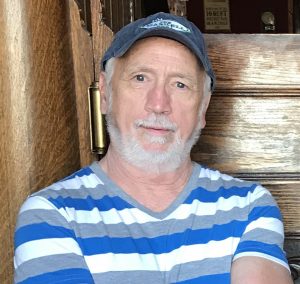 Author Bio:
Russ Scalzo is a singer/songwriter, full-time author and frequent lecturer in Biblical Prophecy, Russ brings a lifetime of technical expertise to a story he believes may very well be the substance of tomorrow’s headlines. “On the Edge of Time” began in 1994 as a 50-page short story named for the newspaper the protagonist writes for, “Chronicles of the End Times.” Russ partnered with author Steve Mamchak and ultimately split the completed novel “On the Edge of Time” into two captivating parts that they feel is both Biblically accurate as well as dramatically powerful, hitting at the essence of our lives now, and during the time that may soon be upon us.
Russ’s new series HIDDEN THRONES features Jack Bennett a consultant for the FBI’s new paranormal division. Jack has an unusual gift that pits him against powerful dark forces that threaten to take over planet earth. In this series, the author reveals the link between spiritual warfare and paranormal activity. A book for fans of the “Left Behind” series by Tim Lahaye and “This present Darkness” by Frank Peretti.

In the 1960’s and 70’s, Russ Scalzo was the front man for The Hallmarks, a band popular along the Jersey Shore, and signed a record contract with Mercury Records. The song Soul Shaking Psychedelic Sally was debuted in October of 67′ by Dick Clark on American Bandstand. After a life-changing decision, he went from performing in bars to ministering in churches and touring the country with his band, Saved By Grace. He has written too many songs to count, including music for several original musicals. He is the co-founder and president of a non-profit Christian theater company based in New Jersey, Lighthouse Stage Productions.

A twist of fate: On July 7 of 2018, The Hallmarks album containing 16 lost songs recorded in 1969 was released by The Numero Group and record label out of Chicago.

Russ currently resides on the Jersey Shore with his wife of 40+ years. He has three beautiful daughters and is a grandfather of five.

What inspires you to write?
I enjoy teaching through story telling. I have taught the Bible for over forty years focusing on the ancient prophecies that concern Israel and the advent of Christ. It is also a joy to share my real life experiences over the years through the characters I write. There is no doubt in my mind that God is my ultimate inspiration.

Tell us about your writing process.
I suppose I am a little of both. I know where I am going, but the journey is fluid to say the least. I let my characters lead the way.

For Fiction Writers: Do you listen (or talk to) to your characters?
I love my Characters. They are real to me in many ways. I know what each of them is thinking and how they will react in certain situations. I believe letting your characters lead the way is vital to the story. And yes we talk often. Ha ha.

Who are your favorite authors?
I love Frank Peretti's books. This Present Darkness and Piercing the Darkness. I also enjoy author James Peterson. I have to say I am a Jack Ryan fan.

How did you decide how to publish your books?
In the beginning, I self published with several different vanity press companies, years 2002-2012. I tried the literary agent route, but that is a tough road. Everyone is looking for a proven author. Then in 2012 I discovered Amazon's KDP program. It was a game changer.

What do you think about the future of book publishing?
As things stand today, in my opinion you would have to have an out of this world offer to sign with a conventional publisher. Unless they are going to promote your work it is not worth your time. There is some gratification in having a publisher, but that is not enough. Brick and mortar book stores have disappeared (Barns&Noble the only exception) so what will your publisher do for you. I know fellow authors with name publishers whose books are dying on the vine. Promotion is the key word. Amazon and others have opened up a whole new world for authors and I do not see that changing anytime soon.

What genres do you write?
Christian Fiction/Fantasy