You are here: Home / Fiction / Interview with Author – Robin Stratton 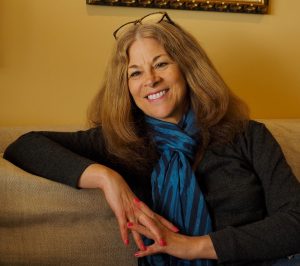 Author Bio:
I’m the author of four novels, including one which was a National Indie Excellence Book Award finalist (On Air, Mustang Press, 2011), two collections of poetry and short fiction, and a writing guide. A four-time Pushcart Prize nominee, I’ve been published in Word Riot, 63 Channels, Antithesis Common, Poor Richard’s Almanac(k), Blink-Ink, Pig in a Poke, Chick Flicks, Up the Staircase, Shoots and Vines, and many others. Since 2004 I’ve been Acquisitions Editor for Big Table Publishing Company, Senior Editor of Boston Literary Magazine since 2009, and I was Director of the Newton Writing and Publishing Center until I moved from Boston to San Francisco in 2018. Now I lead the popular “Six Feet of Poetry” and “Fiction by the Foot” series.

What inspires you to write?
All around me, every day, little things – snatches of conversation, an injured bird, troubling dynamics of young lovers sitting on a bench, an article in a magazine – trigger the writing response, and I’m constantly jotting down ideas on napkins, envelopes, receipts, and yeah, a few times on my hand. My brain is an industrious, focused place; sometimes chaotic, always searching for the most artful way to express an emotion or craft a scene.

Tell us about your writing process.
I like to come up with Big Picture theme first – a friendship tested, questions of morality, the necessity of redefining oneself at mid-life after a crisis – and then come up with the characters to play out the scenario. The actual plot comes last, and I never do an outline because so often characters act in ways that surprise me. They know better how they'll react than I do, so I let them do their thing. I still direct them toward my original theme, but more often than not, the ending is different from what I pictured.

For Fiction Writers: Do you listen (or talk to) to your characters?
I spend a lot of time hanging out with my characters, getting to know them and learning to love them. Each has a backstory that I like to hint at, and I miss them deeply once a book is done, I really do.

Who are your favorite authors?
I love John Updike for his literary brilliance, and he will always be my number one influence. But I mostly read non-fiction: medical memoirs, science books, and history.

How did you decide how to publish your books?
My first novel was published by a small press who did almost nothing in terms of promotion, and my royalty checks were in the neighborhood of $3 every couple of months. I secured an agent for my second novel, and even though she was very enthusiastic about the book and the publishers she sent it to loved the writing, no one offered a contract, and she wound up going in a different direction (hybrid publishing.) Since I had a publishing company myself, I decided I might as well publish myself, and that's what I did. Obviously I'd love to have worked with Random House or some huge place, but I do enjoy having complete control over my books.

What do you think about the future of book publishing?
I think the Big Shift has already happened, and we're just going to keep seeing more of the same: Fewer big publishers putting out books by famous people or already-established best selling authors, and more and more indie presses publishing books by writers who have to deal with the disappointment of not making money and having to keep their day job. I think the one good thing that has come of the small press era is that writers come to truly understand that it's about writing, not selling. That's a tough truth, because we'd all like to quit working and write full time – but for those of us at the indie level, writing is about creating, not about making a living. If you're a real writer, you'll write no matter what, and the Age of Small Presses has given writers an opportunity to investigate their souls to understand WHY they write.