You are here: Home / Fantasy / Interview with Author – RB Watkinson 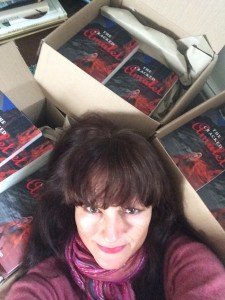 Author Bio:
I live in the wilds of west Devon, England, with my husband, two sons and a variety of much loved animals, my daughter is off doing a PGCE and I see her far too seldom. I’ve held down all sorts of jobs, some interesting, some not so much, but my favourite ‘work’ is writing. I studied Creative Writing at Oxford and on gaining a diploma felt confident enough to really get to work on an epic fantasy. Last year an editor read the manuscript for my first book and loved it so much she got me to sign a three book deal. I’m still astonished, and happy, and, well, astonished…
The Cracked Amulet has just been published by Claret Press and is available in any book shop as well as amazon to order. It’s a rollicking story peopled by conflicted but strong characters trying to do what needs doing in a world determined to make it as damned difficult as possible

What inspires you to write?
Inspiration comes from what I’ve read, what I’ve seen, where I’ve been. Ideas keep deluging my brain so I have to get them down. The characters I’ve discovered keep telling me where they’re going, what they’re doing, what’s happening in their world, so I have to get that down too.

Tell us about your writing process.
I have to admit I’m a bit of a seat of the pants writer. But a few chapters in, I have a fair idea of where the story is going and can then outline in a very sketchy way. The further I get, the more concrete that sketch becomes.
The characters come to me as I write, but really early on as they are the prime drivers of the story – their stubbornness, or impetuousness, or other strong trait, will affect the outcome of any scene.
The Cracked Amulet evolved through many stages, first with a single protagonist then with more till I had four in all, one of which is an antagonist (I wonder if any readers will empathize with her). It happened this way because the story could not be told by one person, it was too big. In my second book of the Wefan Weaves trilogy, there will be even more. If George R R Martin can get away with it in his A Song of Ice and Fire series…

For Fiction Writers: Do you listen (or talk to) to your characters?
Hands up – yes I ‘speak’ to them, I read out their dialogue and answer their questions, but only when I know I’m quite alone. I even use different voices for the various characters – sad but true. To be honest, it helps. Really. The characters become more real, as you ‘speak’ to them you visualize them, how they look, how they move, how they react to what’s going on around them. That’s got to help – right?

Who are your favorite authors?
Is there enough space to list them all? If I stick to the most recent contemporary writers I’ve read then: Terry Pratchett, Mark Lawrence, George R R Martin, Peter V Brett, Brent Weeks, Brandon Sanderson, Neil Gaiman, J V Jones, Robin Hobbs, Steven Erikson, Hilary Mantel, Michael Smith, to name but a tiny few. I couldn’t choose individual books by any of these, but if faced with a life or death decision – the books I couldn’t put down till I’d finished were: Mark Lawrence’s Emperor of Thorns – there was a scene in it that so moved me I had to go off and have a little cry. That’s some awesome writing. Then there was Neil Gaiman’s Neverwhere – so clever, it had me gripped.

How did you decide how to publish your books?
Between finishing my Diploma at Oxford and last spring, I had a lot of knock backs from publishers and agents. Then Katie Isbester of Claret Press read my manuscript and said it was close to ready to publish and could Claret Press have the honour? Well she was so encouraging and had just a good eye for what worked and what didn’t in my writing that I grew to trust her and so said yes.
It’s important that an editor not only knows what will work for a book but is also able to be firm with her author and tell them the truth – the bad along with the good.
With her help I believe The Cracked Amulet has become a cracking good read. I’m sure that The Fractured Monolith, book two in my Wefan Weaves trilogy, will be as good if not better.

What do you think about the future of book publishing?
I think it’s good. There was talk of ebooks obliterating the paper book industry, but it’s not gone that way at all. Conversely, the opposite has happened. More books in all forms are being sold than ever. People love to read and that is a truly good thing.
To escape into another world from your own will always be enabled for any and all by the storytellers of the world, and for many reasons and none, to escape, if only for a while, is a wonderful thing.

What genres do you write?
Fantasy predominantly, but I’m also working on some paranormal fiction