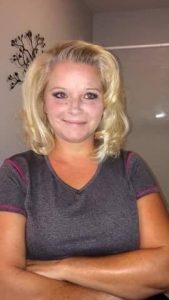 Author Bio:
Since I was four, I loved reading and I could understand more complex words than other children my age, so I picked up as many books as I could find. As my father worked a little cotton candy stand outside, I’d go to work with him, find a spot in the floor in front of the magazine rack and read until he closed down for the night. In the 1980’s, True Crime magazines were all the rage, so I ended up with a possibly unhealthy fascination with morbid articles found inside them. I figured I’d end up writing crime fiction when I was older, but as a child, enough true crime had been committed against me that I couldn’t stomach the thought of writing anything close to that genre, in my early teen years.

With a tumultuos home life, I decided to begin writing at age 13. I could create worlds where I wasn’t living in a hoarder house and didn’t have to fight off unwanted advances. These worlds were my saviors. They kept me safe. My local church youth group also gave me hope, yielding a higher power that I could look up to when times were rough. The kids in that youth group began to read my work. When I saw that I could bring them to tears of joy or sadness, I wondered if there was a real future for me in Journalism of some sort. I took my first class in seventh grade and that was all she wrote….. (Hmm, yes, pun intended.)

Today, I’m the survivor of sexual abuse and hoarder (pets and material items) parents. I give credit to my parents, though, at times, there were different decisions they could have made, they engrained the love of Jesus deep in my soul. I am now the devoted wife of a wonderful, loyal, loving husband, the proud mother of four kids, a ecstatic grandmother, and a fur-baby pet mom. Paws and Claws Pet Rescue in Cherryville, NC is my contribution to help end homelessness for unwanted pets.

What inspires you to write?
Being an inspiration to avid readers, aspiring writers, families of all sorts, and vulnerable, impressionable children are my reasons for writing. Making a living off of my work was never my goal, but it helps pay the bills. Sharing my stories with the world in hopes that I can brighten someone's outlook gives me the will to write new words every day.

Tell us about your writing process.
I've been warned many times that not outlining my books before I start or at least as early as possible is a no-no, but I can't do it. My hands and brain are in cahoots with one another leaving me almost as shocked as my readers are with what happens in this beautiful yet unsettling conspiracy. My hands and brain leave me out until the bones or skeleton of the story is ready for the editing process where I add the meat (good stuff) to the body of my work.

Most of my stories are inspired by other works from what I could tell after I wrote them. (That whole conspiracy thing….) I won't realize that a theme is coming to life until about mid-way through the first draft. My first book, Ever After, is a story I dreamed. The original storyline involved me being called upon by my uncle's lawyer after my uncle's natural death. In the will, I inherited a huge, dark manor complete with a staff to run it. This included a handsome young man who cared for all the yard maintenance. Shortly after arriving at the house, I realized that everyone working inside and out were ghosts. A lot has changed in that book, since then, making it even better and more terrifying than anything I could have dreamed. It's probably my favorite work that I've written.

For Fiction Writers: Do you listen (or talk to) to your characters?
As I'm working in the house, caring for my mom, or gardening, scenes play through my mind. I keep some, toss others. Characters feel real inside my head, so much so that they do have a voice. They tell me to get back to the laptop and work out the dilemma I've thrown them into, especially if they have a love interest waiting on the other side of that predicament. It's neat to know that being an author is the one case where it's okay to have voices telling you to do things. I'm not insane at all. 🙂

Who are your favorite authors?
Cassandra Clare can keep me up for hours on end. Her books are the perfect balance of action and romance. Well…. For my taste, I'd almost like to throttle her characters and speed up their relationship development, but that's proof she's astounding at holding a reader by their guzzle until all the loose ends are all tied up in pretty little bows, at the end of her books. (Also, after reading all her series, I reached out to her. She's an incredible mentor. We've discussed world-building, which I feel is my weakest area. Extremely sweet and down-to-earth, she was gracious enough to give me a lot of tips which still help me evolve with every paragraph.)

How did you decide how to publish your books?
Originally, I thought publishing with big names was the way to go. I received many rejection emails, so I ventured out on my own to self-publish. The first attempt was Black Soul (Forbidden Series #1) which was a flop. It sold around 100 paperback copies and a few ebooks, so I figured it was time to go back to the drawing board. More rejections letters landed in my Inbox, and after almost losing hope, Lyrical Press, a division of Kensington Books, accepted and contracted my whole Cursed Series (Ever After, Ever Bound, Ever Tempted, and Ever Lasting). After navigating the self-promotion world as I helped my publisher with promotion–they did a lot, but not as much as I'd hoped they would–I conducted a re-release of Black Soul with a new cover designer, a heavily-edited second version of the book, and much higher expectations on sales. After the first week on Amazon, I hit best-seller in all Black Soul's sub-genre's, but didn't quite make it into the top 100. The first few royalty checks for Black Soul were pretty hefty amounts, so I decided to go self-publishing, all the way. There is a lot of work involved in self-promotion and at times, it feels shameless, but if done properly, it can yield great rewards.

What do you think about the future of book publishing?
Eventually, publishers are going to reach out to more unsolicited authors and work with them closely. Too many good books have slippe through their fingers. Big names won't be so big anymore. Digital books are going to take over completely with audiobooks being ever more popular as time goes by. The future is bright for writers as long as they take their editing seriously. Poorly edited work is the worst reflection of an author's professionalism. (I say that, even though I've paid for editing and still find typos from time to time.) 🙂