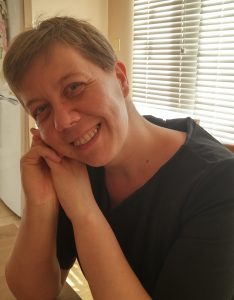 Author Bio:
Mel was born in Germany, where she spent the first twenty-six years of her life (with a one-year stint in Los Angeles). She has always been fascinated by cultures and human interaction, and got a Masters in Social Anthropology. After finishing university she moved to London, where she has now lived for ten years.

If you were to ask her parents what Mel enjoyed the most since the age of six, they would undoubtedly say “Reading!” She would take fifteen books on a three-week beach holiday, and then read all her mom’s books once she’d devoured her own midway through week two.

Back home in her mom’s attic there’s a box full of journals with stories Mel wrote when she was in her early teens. None of the stories are finished, or any good. She has told herself bedtime stories as far back as she can remember.

In her day job, Mel works for an NGO as operations manager. No other city is quite like London, and Mel loves her city. The hustle and bustle still amaze and thrill her even after all these years. When not reading, writing or going to the theater, Mel spends her time with her long-time boyfriend, discussing science or poking fun at each other.

What inspires you to write?
I've always loved stories, and language. I'm fascinated with how words can make images appear in your head.

When you read, or write, you step away from your own life for a while, and get to be someone else. You get to immerse yourself into a world you might never see with your own eyes. But somehow, that world is just as real when you read.

I've always loved reading, and one day I realized I had stories in me too. It's even more fun, when you can make your own worlds, and see them appear on the page. I love the idea that what started in my head can move and entertain other people.

Tell us about your writing process.
I’m usually a pantser. I start off with some kind of image in my mind, like a scene that’s straight from a movie. Usually, by the end of the first chapter, I know what the ending will be, but not much about how to get there. I first write in a notebook, and that’s a very rough draft. For the creativity to come, and the beautiful language that happens when I type up a chapter, I need a physical outline (as in, where is everyone in the actual space the scene takes part, what does it look like, who says what and what’s the other’s response). A lot of the handwritten stuff never makes it onto the screen, it’s there almost like a stage direction so I can forget about it when I get into the story.

For Fiction Writers: Do you listen (or talk to) to your characters?
I have no choice, really. That's how it works, they tell me things and I write them down. I think, mostly, I watch them. It's like a film in my head, and I write down what I see. That first draft is usually all over the place, but oftentimes, what they say to each other, and to me, stays pretty intact.

Sometimes I tell them off for doing things I didn't expect, and that will take the story somewhere quite different from where I thought it was going.

Who are your favorite authors?
My favorite book is The Sparrow by Mary Doria Russell. I love all her books, because the people she describes are so real. I especially love how she writes male characters. They're often small, sickly guys, which makes them relatable. And she writes with humor and intelligence, which is a difficult thing to accomplish.

I also love The Stand by Stephen King. Stephen is my hero because his writing process is very similar to my own, and it's encouraging to a new writer to be shown that their brain is working the same way as such a famous writer's brain. He likens writing to unearthing a skeleton which you can only see parts of while you work. It's exactly how my stories come to be.

How did you decide how to publish your books?
I took part in #sonofapitch on Twitter. It's a Twitter pitch event that helps writers to improve their pitch and then links them with publishers and agents. I was lucky that NineStar Press liked my pitch, and submitted my book to them. They're a small publisher focused on LGBTQI fiction, and were a perfect fit for my book.

What do you think about the future of book publishing?
I love that we have so many different avenues open to us now. It makes for much greater diversity in reading experience. Sure, the big publishing houses still have a lion’s share of the market, and it must be flattering to be able to say you’re being published by Harper Collins or Penguin Random House. Who’d say no to a deal like that? You’ll definitely sell more books.

But being with a small publisher also has its advantages. I love the sense of community at my publisher NineStar Press. I love that I can communicate directly with the person who owns the business, and that she’s involved in everything. I personally also like being involved in every part of a process, and I’ve learned so much about the industry simply because I have to pull my own weight in the promotional effort. I don’t mind that one bit, and I’d do it again.

Being self-published would scare me a little at first, I think. But I won’t rule it out, either. The number of people who were traditionally published and have made a go at it as indie publishers is growing every day, and the support network and professional services available is, too.

What genres do you write?
LGBT contemporary romance