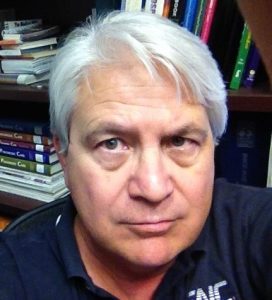 What inspires you to write?
I guess you could say it's a calling. It’s like breathing and eating, something I need to do. It's meditative for me. After a writing session, particularly a good session, I feel refreshed.

On the other hand, I also have things I want to say. Most of my novels have some basis in fact, either historical or current events. The Last Refuge, the second in my mystery thriller series featuring Peter Brandt, for instance, was inspired by news reports revealing that while our troops were still fighting the First Iraq War—Operation Desert Storm—American corporations secretly negotiated with Saddam Hussein to rebuild his war manufacturing capabilities. The basic plot for The Butcher's Bill was inspired by the theft of nearly $9 billion in cash during the Second Iraq War, Operation Iraqi Freedom. That's probably the biggest bank heist in history, and it's never been investigated.

Tell us about your writing process.
I'm a plotter. I use Scrivener, particularly it's virtual cork board, and an app on my Kindle Fire called Story Planner. I've also started using beat sheets, like the one described in Blake Snyder's Save the Cat!

I like to be sure I have a full story before I start writing. That's not to say the final book ends up the way I originally planned. I compare plotting to planning a road trip. You look at a map and figure out where you're going, where you'll stop for the night, what attractions you'll visit. But once on the road, you start taking detours, making unplanned side trips, and so on. You eventually get where you were going, just not exactly the way you originally planned it.

I do most of my writing on the fly. I carry my Kindle Fire along with a Bluetooth keyboard in my ruck, and whenever I get a chance I pull them out and write. I like to write in coffee shops, usually sitting outdoors. Other than that, I usually write while sitting on the couch with my laptop computer. I also use my iPhone to do a lot of writing. I have several writing apps on my phone which allow me to write or work on plotting wherever I am.

For Fiction Writers: Do you listen (or talk to) to your characters?
I listen to my characters. They talk to me, particularly in the night when I can't sleep. They take on their own personalities and argue with me about their roles in the plot.

Who are your favorite authors?
The writers who had the most impact on me early in my life were the Lost Generation writers—Hemingway, Dos Passos, Remarque. But I’ve also read a great deal of—and been influenced by—writers like Ian Fleming, Alistair MacLean, and Raymond Chandler. I also enjoyed H.G. Wells, and still read his books to this day. The contemporary writers I read include David Morrell, Bob Mayer, James Rollins, and many others. I'm always looking to discover new favorites.

How did you decide how to publish your books?
I had a nearly 10-year hiatus in writing. In the Nineties, I was trying to sell my books to traditional agents and publishers. Then 9/11 happened. I did some active duty with the U.S. Coast Guard. After that I decided to switch careers. I was a journalist for more than 20 years, but grew tired of it. I got a job with the U.S. Navy as a research analyst in combat casually care. A few months later, we invaded Iraq. I was so busy for the next 10 years I had no time to write. When we began the pull-out from Iraq, things quieted down for me and I had time to return to writing. It was then I first heard about independent publishing and, since both my wife and I have publishing backgrounds, I decided to cut out the middlemen and go indie.

On the other hand, you can’t deny the indie revolution is flooding the book market. Unfortunately, the number of readers isn’t keeping pace. Readership growth is, at best, stagnant. Plus, the Big 5 publishers are fighting indie writers by lowering the prices of their e-books to match those indies usually charge. You know the competition for readers is tough when the e-books of major brand
authors are selling for .99 cents.

What genres do you write?
Mystery, Thriller, Science Fiction