You are here: Home / Fantasy / Interview with Author – Judith Pratt 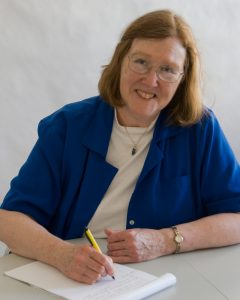 Author Bio:
I’ve been an actor, a director, a theatre professor, and a freelance writer. I’ve studied playwriting, theatre history, and how to teach actors. My plays have been produced in New York City, Boston, Philadelphia, Kansas City MO, and (I love this!) Cape Town, South Africa.
Then a character in one of my plays had a new story to tell—a story that would never fit on a stage. So I wrote a novel, The Dry Country. That was so much fun that I wrote another novel, Siljeea Magic, and got it published by Black Rose Writing! You can find both novels on Amazon.
Now I’m working on another novel, and another play.
I live in Ithaca, NY, with a husband and three cockatiels.

Tell us about your writing process.
I'm mostly a pantser. But that always happens after a story has wandered around inside my head for several months. When I began writing–plays, not novels, because I'm trained in theatre–I'd do character sketches. Now, I only do a character sketch if a character won't talk to me. Sometimes I'll put the character into a weird situation with someone they'd never otherwise meet. (Two guys bouncing around on the DNA double helix, for example, for my play MAIZE!)
Once I was in a writers group that insisted that we did no rewriting; just keep bringing in chapters. As a pantser, that totally did not work for me, because I often begin a story; then discover in Chapter Four that I need to completely change Chapter One.
So outlining may be in my future! So far, I have outlined as part of the endless editing process, using paper and pencil. I like paper. You can spread it out all over your desk and glare at it!

For Fiction Writers: Do you listen (or talk to) to your characters?
I do listen to them. I originally trained as an actor, so I learned how to get into a character's head. That is: What does she look like and how does she feel about that? How does she use language differently from how another character uses it? What does she really want?
Sometimes, of course, the character shuts up or sounds unlike him/herself. Then I have to stare into space until they come back.

Who are your favorite authors?
I would like to write like Ursula K. Le Guin. Always nice to have impossible goals! I love:
Neil Gaiman–especially "The Ocean at the End of the Lane."
Robin McKinley, "The Blue Sword," and "Spindle's End".
Erin Morgenstern, "The Night Circus.",
Peter Beagle, "Tamsin."
Alice Hoffman, especially her "Practical Magic" books because I grew up in New England! But I am omnivorous. Currently: Cly Boehs, "The Most Intangible Thing," and Lauren Goff, "Florida."

What do you think about the future of book publishing?
I think more and more writers will self-publish or go indie. With only five big publishers out there, they have to have blockbusters. And not all of us can, or want to, write blockbusters.

What genres do you write?
Fantasy, Magical Realism, Plays