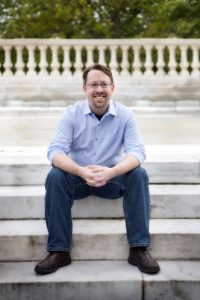 Author Bio:
Jason is an army brat who grew up moving around a total of seven times on military bases from Germany to Fort Knox, Kentucky. From a family of avid readers, Jason was encouraged to read fantasy and science fiction, and write his own stories and comic strips from an early age. Jason wrote his first novel-length story in high school–a parody of Robin Hood that starred all his friends, and got passed around on the bus and read on the way to cross-country races. When he’s not writing, Jason works in Training and Talent Management. Jason has a Bachelor of Arts degree from Bowling Green State University and a Masters of Education from Cleveland State University. He is a member of the Society of Children’s Book Writers and Illustrators. In his free time Jason can be found talking about and enjoying 1980’s music and popular culture, watching Marvel movies, working on visiting all the MLB baseball stadiums, and following the Cleveland Indians. He lives in Cleveland, Ohio with his wife and many great friends. Monster Problems is his first novel.

What inspires you to write?
I'm that person who for some reason, when he watches a movie or a TV show or reads a book, gets inspired to make his own stories. My primary goal is to entertain people. Life can be very busy and very tiring, so it makes me happy if I can help someone relax, laugh, or think about something new. I think about the books I read growing up and how they ignited my imagination and I love to do that for others.

Tell us about your writing process.
I usually start with a vague idea of what I want a story to be about, and then I start writing and kind of feel my way through the story. The questions I keep asking myself are: What makes sense? and What would surprise/entertain the reader? Sometimes I make a sketchy outline and I write short bios of my main characters. The bios help me keep details straight like names, where the characters are from, etc. I don't use anything special, just a notebook and pen and sometimes a Word document. Something I've gotten better about is just plunging in and writing. I used to sit there thinking and staring at blank screens because I wanted to write it all perfectly the first time. I've come to realize I can polish things up in the editing/rewriting stage. The most important thing is to get that first draft done; nothing else will happen without the first draft being done. All that being said, I am willing to stop and back up and start again from a certain point if the story is going down a rabbit hole. For example, I wrote the first draft of a MG sci-fi novel in 2018 and at one point, I split my small group of heroes up and one of them went on a side quest. I realized the side quest was a distraction from the main story and that I should save that material for a sequel. Sometimes you write stuff that isn't what's needed for that particular story or just plain isn't working or isn't very good, and that's OK. Nobody writes wonderful stuff every single time.

For Fiction Writers: Do you listen (or talk to) to your characters?
I try to stay in tune with the personalities I've imbued in my characters. As they go through the story, it's my job as the writer to make sure they all stay true to who they are. When I write dialogue and have the characters make decisions, it all has to be consistent with who they are. I suppose in a sense that means I "listen" to them.

Who are your favorite authors?
My favorite author of all time is Timothy Zahn. My favorite books by him include his Star Wars: Heir to the Empire trilogy (which my mom got for me as they first came out in the early 90s when she worked in a bookstore–I got to see Mr. Zahn speak years ago and I got him to sign the first volume!). I like his non-Star Wars books, too, such as The Blackcollar, Cobra, Icarus Hunt, and the Dragonback series. I also like the Vatta's War series by Elizabeth Moon and the Lost Fleet series by Jack Campbell. In terms of comic books, I really like writers Chris Claremont and Roger Stern.

How did you decide how to publish your books?
I tried for many years to get my first novel Monster Problems published with a publisher. In 2018 my day job was eliminated and I found myself with a lot of time on my hands, so I began sending out lots and lots of queries, and was considering self-publishing. I even was starting discussions with a cover illustrator! But then my publisher Black Rose Writing and I found each other.

What do you think about the future of book publishing?
I think the future of book publishing will continue to be influenced, as it has been the past several years, by technology and multitude of talent finding platforms. With downloadable books and mobile devices it's never been easier to find and get access to more books than ever before, and many more authors can get their materials out there and build a following than ever before. I think it's great that there are more options for readers and writers, and I expect these trends to continue and to become even moreso as time goes on.

What genres do you write?
Fantasy and science fiction