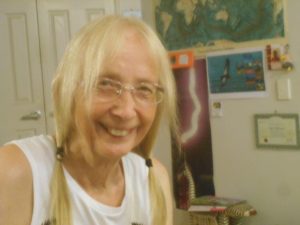 Author Bio:
Gisela (Gigi) Sedlmayer was born on 19 May 1944 in Potsdam, a suburb of Berlin in Germany.
Her family escaped to the West just before the infamous wall went up. They moved around in Germany, following where her dad got work. That meant she had to change 9 times schools. In the end she never had friends again, of fear, she will lose them again.
Finally, they settled in Munich where Gigi studied architectural drafting and met Albert in 1965, marrying in December 1967. She worked as a civil drafts-person in various private consultancies in Munich.
Since her uncle was a writer, she tried to write short animal stories herself. Nothing further came of it, but she developed a love for the written word and started to consume books.
In May 1975, Gigi and her husband moved to New Zealand. Because of language challenges, she started a handcraft business. As a specialty, she made colourful parrots in several sizes of which she sold thousands in a few years.
In 1988, they decided to adopt and became adoptive parents of twin girls the year after. They lived in New Zealand for eighteen years and moved to Australia in September 1992.
One year later Gigi was diagnosed with cancer. After operations and radiation, she withdrew, thinking that she would probably soon be dead, like her friend who died of cancer, but her two little girls gave her the courage to keep going. After a few years, still among the living, her brain started to work again, so she thought, ‘Get a grip on yourself and do something good with your life’.
She remembered the time she wrote short stories and got inspired again, seeing her husband Albert writing the story of their adoption. Her English became increasingly better so she pressed on to develop her creative writing.
Albert taught her how to use a computer and she wrote many short stories. She entered them in competitions and often got very good reports back, which gave her confidence to go on writing. One day the idea for the TALON series came to her and she spent the next several years bringing the story and the characters to life.
She now loves writing and spends most of her time at the computer, developing new story lines. She also loves traveling, 4×4 touring, swimming, gardening, handcrafting, reading, fossicking and enjoys good adventure DVD’s or going to the movies.
Teaching Children Self-Confidence Through Service to Others

What inspires you to write?
I actually never knew for sure what I wanted to be. In my early days, I loved oil paintings, I was really fascinated with them and so I thought I could do restoration of old paintings. But life didn’t let me do my dream. After marring an Australian and then immigrating to New Zealand then to Australia, I was diagnosed with cancer. I couldn’t go working. Still too much pain and having bad feed, not able much to walk, Albert my husband suggested, why not start writing? He had written down our adoption of our twin girls from Fiji. So I started to write short stories. Of course, animal stories. I have send them in for competition, yes, I was so brave, even my English wasn’t perfect, and still is not. I didn’t get the first price but was commended and inspired, that I go in the right direction. That gave me motivation to go on. And one of the short stories, was about Talon and Matica. There it came to me, I wanted to be an author and write more stories about Matica and Talon.

Tell us about your writing process.
No, I am definitely not an outliner. When I sit in front of my computer and put my fingers on the keyboard, the ideas come to me, to go on writing in the story of Matica and Talon I am just developing. Not before or not thinking about, how the story will go on.
Process? Well, I need quiet, no music or anything. But when I put my fingers and the key board, the ideas coming, floating out of my fingers. As it just happens here now as well, trying to answer these questions. If I would think about them, as I overflow them before, nothing came, but now, all is clear. So it is with my writing of the Talon books.

For Fiction Writers: Do you listen (or talk to) to your characters?
Yes, i talk to my characters many times. I laugh as well or cry.

Who are your favorite authors?
Even i am not writing Ski-fi, i love to read ski-fi. so my favorite authors are:
Ben Bova – Frank Herbert – Anne McCaffrey – Arthur C. Clarke – Chris d'Lacey

How did you decide how to publish your books?
After I finished writing (I have to say, it took me 15 years) the first novel in the Talon series about Matica and Talon, TALON, COME FLY WITH ME, I wrote lots of query letters and sent my manuscript to several conventional publishers here in Australia. And guess what? I always got that rejection letter back. I even lost count of them. I tried for many years. I failed. (Waiting for their reply)
Next, I approached an editor and agent and she edited my book, what I thought, properly. (Later one I found out, she wasn’t as good as I thought. Being German, I couldn’t tell the difference) She loved my book and she tried to place it with conventional publishers. But she too failed.
So I looked up all the self-publishers here in Australia and decided to let my book be published by BookPal in Brisbane. At that time, they were new here in Australia and weren’t as expensive as the rest. They did a good job with the designing of the cover page, the outlaying of the book, the distribution, and making an eBook and paperback. They also wrote a press release. But I had no contract with them.
When I finished the second book in the Talon series, TALON, ON THE WING, I approached them again. But to my horror, they became way too expensive. So I waited and in the meantime, I wrote the third book, TALON, FLIGHT FOR LIFE.
Not being able to publish the next two books, since they became too expensive, a friend of ours offered me to pay for these two books. Why? Because he just loved the first book and thought, the books have to go out, people have to read them. So I published them with BookPal again.
But after finishing the fourth book, TALON, CONNECTED, I looked for a different publisher. I know, there were cheaper ones out there, like Create space, but since one has to do nearly everything themselves, and I, not familiar with things like that, formatting and that stuff, couldn’t do it with them. So I looked for another publisher and found Aurora House. I found her on Facebook, asking her to review my first book. She loved it so much, that she told me that she is a publisher as well and if I like to publish my next book. She was cheaper and very nice people.
Since TALON, CONNECTED was already edited in that time, she just published it. Later she found out, that there were mistakes in it, but it was too late to correct them.
In the meantime, I wrote the fifth book TALON, ENCOUNTER. She edited it and published it.
Now I finish writing the sixth book, TALON, WINDSONG, it is edited but I have to wait, for getting the money together. It’s not always easy. As much as I like to get the books out there, as fast as possible, but everything costs.
The books are not doing as well as we thought, however, the success is standing right behind the next corner. I know that. And that’s, why I never give up. Not that I could stop writing anyway, my head is full of the adventures, Matica, my main character, is facing.
In the meantime, my editor and publisher edited the first novel again and published it new. She thinks, the other books have to be newly edited as well, and I agreed. But finding the money again? It all is not easy.
That is my adventure, with my writing experience and publishing. It all took me over 20 years.

What do you think about the future of book publishing?
Hmm, difficult to answer I would say. It depends, if traditional publishers are more tolerant and will publish new authors as well, what they don't do now, then maybe the future is good with them. But, if not, the self-publishing is definitely the best then. and when you can do it, do everything yourself, go with Create space.

What genres do you write?
Children’s, YA, Teens, Parents, All ages