You are here: Home / Interviews / Interview with Author – Christian Saunders 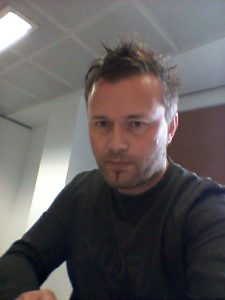 Author Bio:
New Tredegar-born C.M. Saunders began writing in 1997, his early fiction appearing in several small-press titles. Following the publication of his first book, Into the Dragon’s Lair – A Supernatural History of Wales (2003), he worked extensively in the freelance market, contributing to over 50 international publications including Fortean Times, Loaded, Record Collector, Forever Sports and Nuts. In addition, he has written several novellas and had over thirty short stories published in various magazines, ezines and anthologies. He taught English and creative writing in China for five years, before settling in London where he works as a writer and editor in the sport, fitness and men’s lifestyle sectors. His latest release is the novel Sker House on DeadPixel Publications, and he is represented by Media Bitch literary agency.

What inspires you to write?
Proving people wrong. I always had a passion for writing. It was probably the one thing I was good at when I was in school, but when I told people what i wanted to do they laughed at me. I didn’t pursue it until I was much older and had spent nine years working in a local factory learning the nuts and bolts of life. I wrote as a hobby in my spare time at first, and eventually started getting some success. From there, things snowballed. I am living proof that if you work hard enough, you can achieve anything.

Tell us about your writing process.
Some writers plan everything to the smallest detail. Every plot twist, character background, piece of dialogue. I’m not one of them. I am much more spontaneous. Sometimes a short story idea comes to me almost fully-formed, and I always have at least a rough idea of where I want to take a novel or novella, but I think if you spend too much time analysing and planning, it takes something away from the story. I would rather let it flow. It’s much more enjoyable. Sometimes, when you find that writing groove, it’s almost like being a passenger in your own story. I also believe you can’t force it. You can’t turn the creative juices on and off like a switch. My muse is not always compliant and she only comes out to play when she feels like. Knowing that, it means I have to let her get her own way sometimes, and pull the odd all-nighter to get things done because I never know when she’ll next appear.

For Fiction Writers: Do you listen (or talk to) to your characters?
That’s a great question! The truth is, i don’t really know. A little of both, I think. Balance is key. If you only ever do things the one way and never change it up, I think your work will become stilted and boring.

Who are your favorite authors?
Mostly old-school horror. Stephen King, Dean Koontz, Richard Laymon, Joe Hill, Graham Masterton, James Herbert. Although I do read widely, in a lot of genres. I read a lot of autobiographies. I want to know how successful people got where they are.

How did you decide how to publish your books?
I am what’s called a hybrid author. My first half a dozen or so books were published by traditional publishers, but I was never really happy with the process. I couldn’t always say what I wanted to say. I turned to indie publishing about four years ago and have five releases so far – two collections of short stories, a traditional-style gothic novel called Sker House, and two novellas. Out of Time, about an author with writer’s block who will go to any lengths to get the story finished, and No Man’s Land: Horror in the Trenches, which is a horror mystery set in World War I.

What do you think about the future of book publishing?
The industry might fluctuate for a while, but I think within the next few years it will settle down. There will always be a place for mainstream publishers, and the indie scene will offer a place for writers to explore with complete freedom. These are exciting times!