You are here: Home / Fantasy / Interview with Author – Charley Daveler 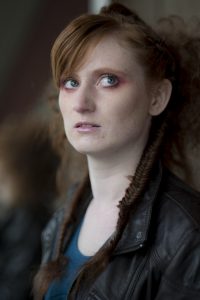 Author Bio:
Consistently throughout Charley Daveler’s plays, short stories, comics, and now novels, her characters trudge through horrific, wondrous fantasy worlds. Described as bold and entertaining, flawed and edgy, her works dig into dark topics such as depression, isolation, agoraphobia, and the downfalls of idolized traits. A produced playwright and web comic artist for over a decade, she has written dozens of book manuscripts before finally debuting her fantasy novel, MAKING THE HORIZON (Sept. 2020). The creative story of 12 ignored artists looks into different minds, mental illnesses, and values as they are spirited away into a blank, new world to become gods.

What inspires you to write?
Initially, it must have been the excitement of living in a different reality and safely experiencing intense emotions. That was when I started – around 12. Today, I've grown an obsession with beauty and optimism I keep seeking out. Don't get me wrong; I'm still a cynical masochist, yet the creation of hope and connection between humans is what I love about the world.

Tell us about your writing process.
I try something different pretty much every time I write a new novel. I have many unpublished manuscripts, and some I sat down and wrote out in three months without any semblance of an outline (or plot), others I have planned out for years before even starting. Sometimes even deliberately.

For Fiction Writers: Do you listen (or talk to) to your characters?
Nah. My characters and I wouldn't get along. The extroverts would make me uncomfortable, the cynics are too judgmental, so on. I don't see myself as having much chemistry with them, partially because we're all so opinionated and don't really see eye to eye. I just like to observe them.

Who are your favorite authors?
I love the Calvin and Hobbes comic by Bill Waterson, Neil Simon's fantasy works, and Diana Wynne Jones' HOWL'S MOVING CASTLE. I'm also deeply inspired by anime and many books I read in middle school like THE BLACK CAULDRON and ELLA ENCHANTED, though my feelings towards them have shifted.

How did you decide how to publish your books?
I was telling people always to try multiple paths to get where they want to be, and as I said it, I realized that I was restricting myself to The One Way. Submit to an agent, then have them submit to a publisher, and all the steps in between. In reality, my most significant accomplishments came through a back door approach. There are many things you can do to get published, including writing an excellent book or paying for it yourself, but the important thing is to experiment and take risks. After I realized that and became more open-minded about different means to publish, I started to do some helpful, important things I hadn't before. Networking with agents and editors and conferences, researching the publishing industry, researching self-promotion, so on and so forth.

Ultimately, I am focused on my priority of creating iconic characters for people to love, and whatever means it takes to get it out there, not just sticking to one determined path, so I have been making the best publishing choices based on research and trial and error.

What do you think about the future of book publishing?
I would like to think it's indicative that we will soon have an economy forced to cater better to small businesses/self-start ups. With the online elements that allow for people to reasonably produce their entertainment, lessons, and other useful necessities, there are a lot of us learning how to have a business and market ourselves. For a while there, we had this huge industrial method of working. One person goes to a factory for 50 years and retires while the owner of it tries to make it big enough so he can hand it off to someone else. There's not a lot of room for Ma and Pa shops right now, certain regulations making it harder. You either have to be a business tycoon or work for someone, but that's clearly changing.

This ties directly into book publishing. There are currently five big companies that pretty much produced all of the "real" books. Yes, there's always been self-publishers and small presses, (or even moderately sized presses), but starting a new publishing company or doing it on your own was incredibly tricky twenty years ago. Now, it's much, much easier for someone to start something fresh without already being a billionaire. Which is a good thing, for the book publishing industry as well as many others.