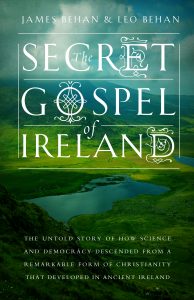 About The Secret Gospel of Ireland by Leo Behan

The Untold Story of How Science and Democracy Descended From a Remarkable Form of Christianity That Developed in Ancient Ireland.

As the light of their empire faded into history, the ancient Romans made one last-ditch effort to plant the seed of their civilization in a foreign land—they launched a mission to bring Christianity to Ireland. And there, on a little Emerald Isle that had never been conquered and occupied by Rome, something extraordinary happened. In the process of converting from paganism to Christianity, the ancient Irish developed a remarkable approach to the Christian faith that would one day make science, democracy, and our modern world possible.

In this joyous and illuminating journey through more than ten centuries of history, James and Leo Behan follow the astonishing story of how the holy men of Ireland shepherded the West from antiquity to the modern era. With their powerful brand of “Irish Christianity,” the monks of Ireland transformed Europe and produced the key that would ultimately unlock the awesome potential of the Christian faith.

Sure to intrigue, entertain, transform, and capture the imagination, The Secret Gospel of Ireland lifts the veil that has for so long separated science and democracy from their Christian roots in ancient Ireland. More than a book, it is a revelation in which history, philosophy, and theology come together to show how our civilization floats in a sea of faith that was born on the Emerald Isle centuries ago.