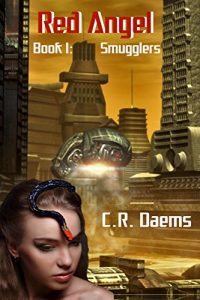 About Red Angel: Book I: Smugglers by C R Daems

Anna nearly dies at age four from the deadly Cacao virus. She survives, thanks to a mysterious red-headed poisonous krait. The medical community is excited because there is currently no known cure for the virus, but Anna's krait, which she thinks a Red Angel sent to take her to heaven and her dead parents, is not the answer. She and her Red Angel have a symbiotic relationship that provides remission but not a cure. If she is ever separated from the krait, the virus will become active, and she will die within days.

Because of the krait's presence, Anna struggles through multiple foster homes during her early years, ostracized by children and adults alike and plagued by thieves willing to kill her to snatch the unique and extremely valuable krait. Over the years, Anna comes to believe that the krait she calls Red not only keeps her alive but may contribute to her outstanding performance in school and her ability to solve puzzles.

Recognizing her talent, the Naval Intelligence Agency, NIA, hires her and assigns her to an elite team tasked with tracking down interstellar smugglers. The smuggling cartel is quick to retaliate. Now in addition to murderous thieves, Anna, along with the NIA team, has assassins and smuggler war cruisers stalking them. It may take a Red Angel to save them.